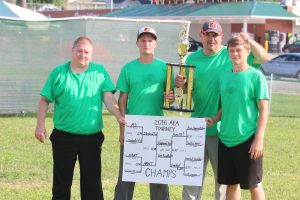 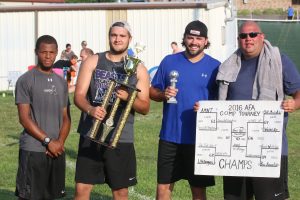 ASHLAND, Ky. – The fifth annual Amy For Africa Wiffleball Tournament on Aug. 12 has its biggest and best field, according to chairman Sam Beason.

With all four former champions in the field, the AFA Wiffleball Tournament promises to bring a day of excitment and home runs to the two fields in the corner lot of Unity Baptist Church on 29th Street and Blackburn Avenue.

Beason released the schedule for the one-day tournament last week.

“Putting together a bracket wasn’t easy with so many great teams and players,” he said. “We want the best tournament and best experience possible for everybody who plays.”

Games begin at 8 a.m. and continue through the 5:15 p.m. championship when the only team that didn’t lose a game will be crowned.

For the first time, first responders have teams in the field as the Ashland Police Department, Ashland Fire Department and Boyd County Sheriff’s Department have entries.

“I couldn’t resist putting them against each other,” Beason said. “They want to play each other anyway. People need to get here to watch that one.”

Every team is guaranteed two games but the tournament champion will have an undefeated day.

“It’s going to be a grind for whoever wins it,” Beason said. “Nobody has an easy path, at least not when it gets to the Elite Eight round.”

A newcomer to the tournament this year will be Jody Hamilton, the National High School Baseball Coach of the Year two years ago and two-time Kentucky state high school championship coach at Boyd County and West Jessamine. Hamilton and his son, Casey, will team with AFA co-founder Mark Maynard and his son, Stephen, on Mark’s Mighty Men. The 3-M team has been to the finals once – losing in the first year to L-Train – and reached the final four another year.

“Mark probably gets GM of the Year for that one,” Beason said. “But it won’t be easy for them either. This is Wiffleball. We’ve had a 4-year-old (Landon VanKirk in Year 2) hit a home run and last year we had our first female home run (from Brittnany Hoback).”

L-Train, Kona Kannon Ballers, the Baseball Bunch (now Benny & the Jets) and Shepherd’s Fold are the former champions in the tournament.

Proceeds from the AFA Wiffleball Tournament go to the Amy For Africa ministries that support schools in Uganda. Amy Compston and Maynard are the co-founders of the organization.

Here is the schedule for the Aug. 12 tournament: