Amy For Africa ministry is building on The Rock, Jesus Christ! 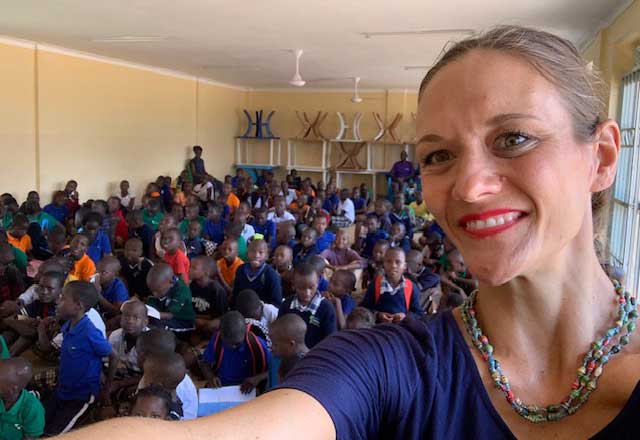 July: Team of 21 from New Life Fellowship Church in Russell KY comes over with over 5000 pairs of shoes. Through evangelistic outreaches we witness 250 souls accept JESUS as their LORD and Savior. GOD provides for School Van, a Motorcycle for Chris and Amy in Uganda and GOD provides Threads of HOPE with a new venue, machines and supplies. Praise GOD!

June: Uganda put back on lockdown. GOD provides over 20,000lbs of corn and 9,000lbs of beans to distribute to hundreds of suffering families. Praise GOD!

March: GOD provides a house for Chris, Amy and Jarek in Uganda.

February: GOD provides for all the floors for the new AFA Christian Academy.

December: First Mission Team goes over since COVID. Praise GOD! GOD provided for all the Plaster for the new AFA Christian Academy!

October: GOD provided for all the doors, windows and plumbing for the new AFA Christian Academy! Praise GOD! Uganda’s Borders open up and Amy gets to go for the first time since COVID.

July: GOD provided for the 3rd story walls to be paid in full!

April: GOD provides food for a month for over 200 families through the AFA ministry.

September: AFA purchases house that will be temporary home to the AFA Christian Academy.

June: Amy’s family – husband Chris, children Bailee, Elias and Jarek and niece Reagan Evans – joins her on summer mission visit to Uganda along with three others.

May: Amy’s 10-year-old niece, Kinslee Wesolowski, runs half marathon for the AFA feeding program and raises $2,400 – enough to provide weekly breakfast to children in ghetto area for six months of Saturdays.

February: Purchased one more acre of land on farm.

September: Closed on five-acre farm a few miles from where AFA Christian Academy will be located.

August: Sixth annual AFA Wiffleball Tournament has record 40 teams and $3,000 worth of donations.

June: Closed on three-acre property where AFA Christian Academy will be located.

June: Vision for AFA Threads of Hope ministry is born.

May: Saber Management donates $17,000 to pay for rest of land contract.

May: Jarek Compston runs the Indy Mini half marathon with his mother and helps raise $17,200 for property in Uganda.

March: The Lord supplies the funding for AFA to put down $20,000 for a down payment on a $75,000 piece of property where the future El-Shaddai school will be located.

February: Amy goes to Uganda to host a women’s conference and God clearly reveals to the AFA team that it is time to purchase property for the expansion of the school.

January: A discipleship class at the FCI Summit prison expands to 60 male inmates.

December: Team of 10 take mission trip to Njeru and hand out 3,000 pounds of Christmas gifts over five-day gift distribution and serve 4,000 meals while sharing the gospel with thousands.

November: Six-year-old Jarek Compston runs the Marshall Half Marathon and raises $11,500 as part of Jarek’s Journey to ship Christmas gifts to Uganda.

June: Amy spends month in Njeru, getting to know and learn more about the teachers and others in the village. Amy led a two-week discipline study with 150 new converts in the area.

May: AFA builds a third classroom at the growing El-Shaddai school.

January: With excitement behind AFA’s partnership, El-Shaddai more than triples in size to 50 students.

January: AFA partners with Silent Whispers to provide a weekly Bible study and meal to nearly 400 street kids in the “Ghetto” area of Jinja.

January: Amy and Chris take small team for fact-finding mission to the village of Njeru and host the first-ever evangelistic crusade. Eighty-two came to know the Lord in this all-Muslim village.

October: FCI Summit prison partners with AFA for a second consecutive year to host a 5K to support missions.

August: A new partnership begins with Pastor Cyprian Illukol and El-Shaddai Nursery and Primary School in Njeru, Uganda. The school has 15 students.

July: The Lord leads AFA to break away from partnership with United Christian Expeditions.

June: Amy and Chris return from mission trip with bouts of malaria and spend time in hospital recovering.

May: A 22-member team goes to the Moyo district on a medical mission and treat more than 24,000 in the villages over two-week period. AFA team hosts crusade in Ishaka where more than 100 were saved.

November: Amy is recognized by Samaratin’s Feet as an International Woman of Influence at their annual Barefoot Gala.

October: Amy and Chris run the grueling three-day West Virginia Trilogy, a 94-mile endurance endeavor in the Allegany Mountains. It was 31 miles the first day, 50 the second and a half-marathon on the third day.

May: Twelve-member mission team goes to Moyo district and distributes 26,000 pairs of shoes over eight-day period.

March:God provides $52,000 through donations – one month before it was needed – for taking Samaratin’s Feet shoes to Uganda.

December: Samaratin’s Feet proposes sending 26,000 pairs of shoes with AFA to Uganda in a $52,000 fundraiser.

September: Amy is recognized on the floor of the Kentucky Senate for AFA’s work.

May: Amy and Chris embark on running a marathon a month for six months in branding and fundraising effort for AFA. 20,000 gospel tracts were passed out by the AFA team during these races.

December: Through the fundraising effort, $43,000 was raised to support Christian education and spreading the gospel in Uganda.

September: Amy is recognized on the floor of the Kentucky House for AFA’s work.

June: First civic club meeting in Flatwoods where Amy spoke publicly for the first time about her history with drugs and alcohol.

April: Amy runs in her first Boston Marathon and she finishes 30 minutes before terrorist bombs detonate. She is not hurt and 22 family members are also spared.

Amy For Africa, an international Christian ministry, was established in May 2013. We provide Ugandan children with a high-quality education and give them a knowledge of God’s word and Jesus Christ through discipleship.

Donate to Amy For Africa?

To make a secure online donation to Amy For Africa, please use the Donate Now button
(Amy For Africa is a federally approved 501(c)3 organization)

Child Sponsorship offers a simple way to make a big eternal investment into a child’s life! A donation of only $29/month will enable a child to attend the AFA Christian Academy where they will receive a high quality christian education, discipleship classes, two meals a day, their books, school supplies and their required school uniforms. Child sponsorship is a way to share the love of JESUS around the world!