Day 10: Blessings galore on a trip of a lifetime 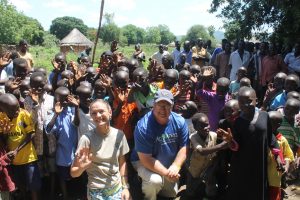 PALORINYA – The Amy For Africa mission team took another long bus ride into the bush of the Moyo district and returned home with blessings galore.

More than 4,000 greeted us because the word continues to spread about what is happening through AFA and United Christian Expeditions. The partnership with Samaritan’s Feet and AFA has made a long-lasting impact on the Moyo district of about 1 million. Two destinations were added to the original seven and at least five more villages wrote letters requesting that we came as well.

This group of 12 short-term missionaries has developed a tight bond in what for each of us sees as a life-changing experience. Bro. Floyd Paris and UCE are entrenched in the area through the churches, the pastors, the government and the people. They coming to Bro. Floyd for help because they know he can deliver. He’s like a general over here among the Ma’di people and is very much considered “one of them.”

We have seen him in action this week and it’s truly incredible. AFA is more firm than ever in its commitment to Bro. Floyd and the UCE ministry. His heart for the people of the Moyo district has bled through to the rest of us. If we doubted it before, we don’t any more.

“This team has helped to fill a God-size vision,” Paris said. “It could not have been accomplished without the dedication, the selflessness, the compassion in a group that is led by the spirit of God. This team has demonstrated all those qualities which shows their motives are pure and have the heart for Jesus.”

The village of Palorinya walked miles and miles to find out about what was happening in the rural regions. They don’t have Facebook or the Internet – at least in the rural districts – so it’s by the old-fashioned word-of-mouth that has brought out thousands at each of the seven locations.

Two trips on Tuesday were to mostly Muslim areas, including Aliba which is 100 percent Muslim. The team split on Tuesday and went with no fear because God is in control. The kindness that UCE showed to Aliba during a cholera outbreak last year opened doors to start a Christian school – the fifth Penne Paris school in the region – last September.

Of all the visits made so far, none were more grateful to see UCE and Amy Compston’s AFA team than the village tribe in Aliba. Not only was there nothing to fear but there was celebration on the grandest scale. How great is God’s love? It surpasses all understanding.

The days are passing us by more quickly than any of us want although it will be good to see loved ones at home in a few days. We have only one more day of distributing shoes and sending the message to children and adults that, indeed, JESUS SAVES!! We will go to Vumbula, where another Penne Paris school is located, and are expecting in the neighborhood of 8,000. Then we are coming back to where Bro. Floyd lives and hand out shoes in Jesus name in his surrounding area.

What this 15-day missionary trip has done is strengthen each of us spiritually in ways that cannot be described. It has also been good for our missionary on the ground, who has enjoyed the company of old friends and new friends uniting in powerful ways for God’s purpose.

Wednesday’s shoe distribution was much like the rest – filled with excitement, smiles and full of God’s spirit. Some of the children were afraid of us because we’re the first white people they have ever encountered. But on most occasions, one smile did it. They calmed, sat in the chair, had their little feet washed and heard the words JESUS LOVES YOU! also maybe for the first time.

Some who don’t understand what we’re doing or why simply haven’t experienced the pure joy that comes with it. Words, photos and Facebook posts can’t do it justice. God has put the people of Moyo, the UCE ministry and Bro. Floyd Paris on our hearts in the best way ever.

Go on a mission trip: It will change you forever.