One was shattering her half-marathon time by 35 minutes. The other was how much she raised for Amy For Africa through her running.

The 12-year-old niece of AFA co-founder Amy Compston had an impressive day in the Horse Capitol Half Marathon in Lexington. She ran with her mother Danielle Wesolowski, her friend Savannah Thomas and Savanah’s mother, Jennifer Thomas. 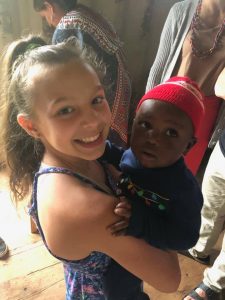 Kinslee, a sixth-grader at Baker Intermediate in Winchester, raised $3,770 – nearly $1,000 more than the goal she had set for herself – for the ministry that’s close to her heart for more reasons than her aunt. She went to Uganda on a short-term AFA mission trip with her father, Andy Wesolowski, and six others in December.

This was the second time that Kinslee has used her running ability to raise money for the AFA ministry. She helped bring in $2,500 the first time.

Kinslee and her friend, Savannah, finished the course in nearly identical 2:03 times while their mothers, who also raced together, came in a little later. Danielle, who gave birth to daughter Ivy only eight months ago, said she was pleased with her outcome.

Kinslee was just as excited about how much participating in the half marathon benefitted AFA. “The goal last year was $2,000 and I decided to go bigger,” she said.

After spending a couple of weekends in Uganda last December, Kinslee made new friends and saw the need. Her heart was so touched that she told her parents that missions may be in her future.

“It was amazing,” she said. “It was a whole different world.”

Kinslee was immediately touched by how the Ugandan children were so friendly and welcoming despite the hardships they faced every day.

“They came up and hugged me like they knew me their whole life,” she said. “I came back a lot more grateful for things that I have. I’m trying to be as nice to other people as these people were to me.”

As for the race, Kinslee said her time was surprising since the her PR was 2:38. She blew that out of the water. “I had a good day and it was fun, but I’m tired,” she said.

Mother and daughter trained for about six months for the half marathon.

“We kind of planned on it last year but COVID closed it down for five or six months,” Danielle said. “This was my first race after (the birth of) Ivy so I was pretty happy with my time.”

She was especially proud of her running team that ran with each other.

Danielle said Kinslee told her she already has a new goal in mind for a half marathon next year. “It’s for $5,000,” she said. “She was really excited to get to go to Uganda. It was a tremendous experience for her. She fell in love with the people.”

And they loved her back, said her aunt.

“The kids over there just gravitated to her and she was so good with them,” Amy Compston said. “I was so proud of her. And I’m so proud of her and Danielle for running for AFA and raising this money for the ministry. They are both such a blessing.”

Danielle has also made a previous mission trip to Uganda in 2017. She and her husband have been supportive of the ministry since it started.

“When Kinslee came back home (from Uganda), she told us, ‘I know I’m young but I may want to be a missionary,’’’ her mother said. “It made a big impact on her life.”