AFA thankful for those showers of blessings 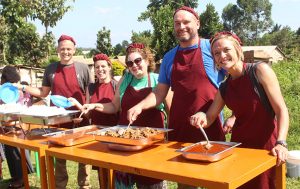 The AFA team served up lunchto more than 500 Ugandans on Wednesday at a Christmas celebration.

NJERU, Uganda – An early morning shower poured so hard on Wednesday that Chris and Amy Compston nixed a morning run, which almost qualifies as breaking news.

The sky cleared up about the time the Amy For Africa mission team was leaving for Lifepoint Church to begin setting up for a community Christmas celebration that lasted nearly eight hours.

The raindrops quit falling but the showers kept coming. Only these were showers of blessings.

The program was scheduled for 2 o’clock in the afternoon but Ugandans don’t worry much with clocks. They started coming up to sit under the tent on what turned out to be a sweltering afternoon as early as 10 o’clock. Meanwhile, we took dozens of preloaded suitcases full of gifts to the location a few blocks from the church because what’s a Christmas party with presents?

The day included praise and worship music from the Ugandans and testimonies from AFA’s Amy Compston, who shared her “Grace Story” with the passion she always puts into it. The story stays the same in any language. Amy was gloriously redeemed and is now an devoted follower of Jesus Christ. She will tell anybody within earshot what God has done for her.

Mike Blankenship, a Baptist preacher from Catlettsburg, Kentucky, presented a gospel message to the hundreds assembled that was simple and direct. The best free gift you will ever receive is the one provided by Jesus Christ.

The results were fabulous with 40 praying to accept Jesus on this November day in Uganda.

The community program was a dream for Cyprian Ilukol, the pastor at Lifepoint Church and leader of the El-Shaddai school there. He said he asked the Lord to some day provide a way for him to share in this manner. His prayers were answered because of a community in Kentucky that rallied around Amy For Africa’s mission and provided enough Christmas gifts for 1,000. Your donations toward Amy’s son, Jarek, provided the means to ship those gifts and provide a Christmas meal that was prepared by the women at Lifepoint.

It was truly two communities 8,000 miles apart working together to introduce Jesus Christ to a community that has a thick Muslim population.

Lifepoint is becoming a beacon of light and you can see it every day. More and more are coming by the church and asking questions. The church has more than tripled in size since January. Pastor Cyprian has become one of the most trusted members of the community that lives in much darkness. But there’s a light shining at Lifepoint and Amy For Africa is excited to provide some of that light too.

The praise and worship (about two hours long) preceded the testimonies. Then came the meal and every last handful of rice was taken. The women prepared enough meals for 700 and they did it over outside open fires. I know it’s an overused word but that was truly amazing.

Everybody was excited about the gifts and some a little too excited. It was hard to get them to understand the idea of making a single-file line but the job got done and everybody walked away with something. We are still learning the culture and how to adapt to it but not change it. You live and learn on the mission field and we did on Wednesday.

Even though our patience was tested at times, especially during the gift distribution, the love of God was all over that place and showers of blessing fell upon us in the form of 40 praying to accept Jesus into the hearts. So many others thanked us for being so kind to them and the looks on the children’s faces as they played with maybe the first real toy they had ever received will be what we remember.

Those showers of blessings sure beat raindrops.