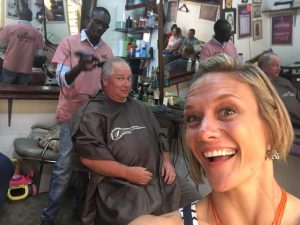 JINJA, Uganda – So on Thursday, the Amy For Africa team visited Jinja’s version of Floyd’s Barbershop and saw Moses near the Nile River.

No, we’re not delirious.

We just hit the refresh button.

Less than 24 hours after an exhausting day in boiling hot sun – many of the crayons we brought with us to give away melted inside the box – the 10-member team took a collective deep breath after a rewarding but tiring day. We needed it after a day where we fed and presented Christmas gifts to more than 500 Ugandans after worshiping in song and dance with them for two hours.

Forty came forward for salvation, including one man who we called “The Basket Man.” He was walking up the road with about four oversized straw baskets when he heard Amy Compston sharing her story. “Basket Man” was compelled to stop and listen and then later responded to an outdoor altar call.

So while it was tiring it was also breathtaking in other ways.

After a late morning wakeup, we put together a group choir to sing “Happy Birthday” to my wife on Facebook Live. Of course, it was 3 a.m. in Ashland. It took us two tries since we sang the first time with the Smartphone camera facing the sky instead of us (the Smartphone is obviously smarter than this group).

Then it was on to nearby Jinja where we had lunch at a nice restaurant and were treated to some Western food – Philly cheesesteaks, French toast, chicken wraps, spicy French fries and cold milkshakes – that was certainly a taste from home. (I guess it doesn’t seem like we’re suffering too much?)

We even visited Jinja’s equivalent to Floyd’s Barbershop where yours truly got a trim from Dragga Victor at Dragga’s Barbershop. It was my second haircut in Uganda and also only the second time someone besides my wife touched my hair in 37 years.

It was the full treatment from Dragga, including a couple of spritzes, a warm towel and aftershave cologne swished through my nearly bald head. My wife told me she may be out of a job, but I’ll stick with the Kentucky barber in the home instead of traveling 8,000 miles away every six weeks. (I did drop the hint about the warm towel but I’m not going to overexpect).

Eight of our team watched Dragga (no relation to the Rocky V opponent, as far as I know) work his magic on my thinning hair.

It was memorable for other reasons too. Three of our crew – Diane Anderson, Steve Wesolowski and Kathy Whitely – took turns riding on the boda boda (small motorcycles) with Pastor Cyprian Ilukol while the rest of us walked the mile or so from the hotel to the restaurant.

That’s adventure riding for sure, but Steve, who we call “Jungle Cat,” waved to Ugandans like he was in a parade. Diane and Kathy were more clutching for dear life as Cyprian navigated through the pot-hole filled streets.

From there we traveled to Kalagala Falls, where the Nile River intersects, for a short visit of God’s beauty. Several dabbled their toes in the Nile River and Moses (our bus driver) was fittingly along with us. At least I thought it was fitting.

The best part of the day was yet to come with Pastor Cyprian leading a full house in Lifepoint Church through a two-hour Bible study that also achieved the goal of strong bonding within our group as testimonies were shared. It was my first opportunity to watch Pastor Cyprian break down the Word of God and it was impressive. He clearly has a gift and the rave reviews I’ve heard about him are not overstated. It will be a pleasure listening to him preach on Sunday.

Cyprian is a graduate of Global Theological Seminary which former Unity Baptist Church Pastor Harold Cathey started some 25 years ago. GTS can be proud of products like Cyprian Ilukol, the man who God has partnered Amy For Africa with for more than a year now. He has a heart for this Muslim-thick community in this part of the world.

A day of rest was refreshing and now we roll up our collective sleeves for another 10 busy days in Uganda.

We go forward expecting to do and see great things through God’s grace.