An enduring legacy and an encouraging day for AFA 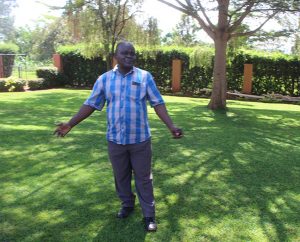 Geoffrey Kadhaya is the pastor at Victoria Baptist Church and the leader at Global Theological Seminary in Jinja.

JINJA, Uganda – We received a blessing bonus on Friday with a day of encouragement.

This was already a day that was going to be special for me and I’ve been looking forward to it since we began planning the trip this summer.

We were going to set aside a day to visit Global Theological Seminary and Victoria Baptist Church. They have connections for me through both family and church ties.

My in-laws, Fred and Alva Boggs, were short-term missionaries to Uganda long before I ever thought about becoming one. They made multiple trips, including one five-month stay, to work with their dear friends Harold and Beverly Cathey. They fell in love with the “Pearl of Africa” and their influence in Uganda is why Amy For Africa exists today.

The Catheys left the pastorate at Unity Baptist Church to become fulltime missionaries for a dozen years in Uganda. They loved everything about the place and it was Harold’s dream to make it better by training pastors through a seminary. He began Global Theological Seminary to find men of God who could be leaders not only of churches but in their communities.

Global continues to flourish in producing high-quality pastors and one of those happens to be Cyprian Ilukol, the pastor of Lifepoint Church where Amy For Africa is currently working. Cyprian was highly recommended as someone with the utmost integrity and a true man of God. His testimony includes him walking for miles and miles to be trained at the school because he was obedient to God’s call on his life no matter what the cost.

My first two trips to Uganda were about 450 miles from Jinja so a visit there didn’t seem feasible. But with Amy For Africa now working near Jinja, in Njeru, the opportunity presented itself for this trip. My in-laws were as excited as me that I was going to see Victoria Baptist Church where much of their work was done. My father-in-law lugged load after load of bricks for the building and my mother-in-law stitched banners that are still flying strong inside the beautiful church.

Fred helped put in the unique rafters of the place and has told us that he had a perfect view of Lake Victoria from up there.

Bro. Cathey wanted Victoria Baptist Church to be a beacon in the community and for that to happen it was going to be spectacular. He made it happen and the church that is now 25 years old remains one of the most beautiful buildings in Jinja.

We were able to walk around inside the church and admire the handiwork that includes former light fixtures from Unity Baptist Church. Fred and Alva weren’t the only members of Unity who had a hand in Global and Victoria. Several men and women from the church visited on mission trips to help Bro. Cathey with something.

When we visited at Global on Friday, Pastor Geoffrey Kadhaya talked about how Bro. Cathey virtually changed his life from being a Mormon missionary to a born-again believer through training at Global. There are few better expositors of the Word of God than Harold Cathey in his heyday and he was smart on things of the world too.

He didn’t let Kadhaya pay any school fees at first because he was figuring that with his background in Mormonism, he wasn’t likely to stick around. And he didn’t want him talking in class because of his potential influence on them. Kadhaya sent his friend to take a week’s worth of classes first and he reported back that the teacher was real.

So Kadhaya took a class where Bro. Cathey began teaching from Genesis and Romans and he also strategically threw in a lesson about cults.

“When he went to Romans chapter 8, that was it,” Kadhaya said.

He took classes free for a year and then Bro. Cathey, when convinced Kadhaya was hooked, told him it was time to starting paying school fees.

Kadhaya laughs big when retelling the stories. Bro. Cathey also convinced him to begin attending Victoria Baptist Church and asked him if he’d be interested in visiting door-to-door (knowing his Mormon background). One thing led to another and Rev. Kadhaya now not only operates Global, but also is the pastor in his 15th year at Victoria Baptist Church.

Our visit to Victoria Baptist Church was certainly special but it was made even better when we learned it was a nursery school graduation day. One of the participants was Amy, the daughter of our bus driver Moses.

They welcomed the AFA team and Moses’ wife, Mary, was especially happy to see Amy Compston. Mary is a teacher at the Victoria Baptist Academy and the graduation celebration was a joy to watch. The children sang multiple songs in multiple outfits in an entertaining program.

Our Amy and Danielle Wesolowski were invited to dance with the children, who really knew how to move, and our ladies held their own! The people there were honored that AFA had come to visit even though we had no clue it was happening. We became encouragers to them and weren’t even trying. That’s so God.

From Victoria we went back to Lifepoint Church and packaged up about 1,000 gifts in two hours. We also cleaned out the church where our trunks and suitcases full of gifts were being stored and packed up trunks full of gifts in the bus for Saturday’s visit to the ghetto area. The team worked well together with “Gen. Diane” barking the orders to make it all go smoothly and in an orderly fashion. We found encouragement from some of the children there who helped us and from getting the job done.

If all that wasn’t enough, I received a text message from Beverly Cathey who wrote: “Harold is weeping in Thanksgiving to God for blessing and continuing the work there.”

That, my friends, encouraged our souls and I hope it does yours too.