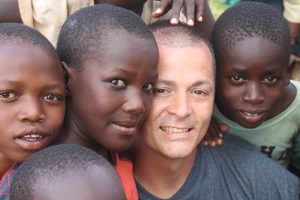 Chris Compston with some of his Ugandan friends from an area in Jinja called “The Ghetto.”

JINJA, Uganda – Hope came to a hopeless place on Saturday.

Amy For Africa’s mission team came to the area in Jinja called “The Ghetto,” where hundreds of children live in deplorable conditions. Their “homes” are shanty shacks from former railroad worker days in Uganda. Not much is left in the area where sewage can be found running through the streets and piles of trash seems to be part of the décor.

It’s conditions unlike you would find anywhere in the United States.

Yet the children are children. They smile. They play. And they will take the hand of any mzungu (white man) they see.

When our bus rolled up to where they were sitting, they came running with smiles befitting royalty.

This was AFA’s third visit to the “Ghetto” since January so the children are getting used to seeing us around. Our organization sponsors a meal every Saturday for approximately children through Silent Whispers, which has no other funding arm. The meal consists of porridge and cookies. It’s not much but it’s more than they receive on most days.

Masenge Godfrey is the coordinator of Silent Whispers and Amy Compston of AFA said she was proud to help that cause. “How could we not help?” she said. “When you see what these children are facing, it’s unbelievable. Praise the Lord for Godfrey and Silent Whispers.”

The 10-man mission team walked through the streets and past the broken-down shacks that the children call home. The streets were full of filth and the stench was enough to turn your stomach. We walked with the children, almost everyone had at least two clutching our hands, through the main street, past their homes where some may even be getting cared for by a sibling.

Members of the mission team fought back tears and wondered how could this be? Brent McKee said one of the children with him asked him if he was sick. He said no and she said, ‘Then why these?’ pointing to tears streaming down his face.

Two of the very young children who were tagging along with Brent gave out and laid down in a grassy spot. He scooped them up and carried them the rest of the way around.

It’s hard to describe how anybody could live day to day in these conditions.

Yet the children, at least on this day, were filled with joy.

The day was both heartbreaking and heartwarming. Because they are children, their smiles speak volumes. It’s a sad place but they have hope and maybe a little more hope when a busload of mzungas is sighted.

We did our best to introduce them to the one who provides hope for all and that’s Jesus Christ. After feeding them the breakfast, Amy and Pastor Mike Blankenship spoke to the assembled group of children. They were amazingly well-behaved (Amy’s threat of no gifts if they don’t listen may have helped) as Mike delivered a simple salvation message.

Africans working with him. We learned from a different and difficult experience on Monday.

It was all caught on Facebook Live if you want to catch the Gorilla’s return to Uganda. I’ll leave it at that.

What struck each of us though was the end of praise practice when the praise team members literally fell on their face in prayer before a mighty God. It was humbling to hear them thanking Jesus for all He has given them. It was hard not to feel some shame inside our own hearts because God has given us so much.

Despite having “easy lives” our prayers don’t have near the passion of these people serving God in this little church in Uganda. Their praise of God was open and free and that’s how it should be for all of us.

If we could take some of this spirit home with us, bottle it up and make sure every church everywhere had some, revival would truly break out in the United States.

Today’s lesson was we need to be more thankful and it was driven home in God-sized ways to each of us.