There is life and love of God at Lifepoint Church 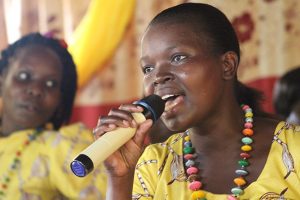 NJERU, Uganda – Very little is the same in America as it is in Uganda.

It’s not different in a bad way, mind you. For instance, they sing and they dance (OK, a little different) during praise and worship. But if we could take a peek into their hearts, the place where it really counts, you would find people totally focused on lifting up God.

Nobody was looking at their watches because there’s no place they’d rather be.

They love praising God. Period. It’s not a show. It’s the real deal. A genuine God-loving-head-turning-loud-music-playing party with Jesus Christ at the centerpiece of all that’s said and done. Even their tithes and offerings came with a beat.

His name is lifted through the top of this metal building that is being held up by two large tree posts in the middle of the room.

Let me share a testimony from Pauline, one of the teachers at the El-Shaddai nursery school that Amy For Africa sponsors.

Pauline became sick with malaria a couple of weeks ago. To us, that’s devastating news. To them, it’s their life. This is no life of comfort here and there is no time to be sick.

But Pauline testified that her sickness this time had knocked this strong woman down. She has a 4-year-old son, but no husband. He left her a few years ago. Pauline said she was so ill, that it was hard to care for her small child. He asked his mommy for something to eat and she instructed him on bringing her items, like tomatoes and a knife, to get something cooking.

Pauline made the fire in her kitchen, which by the way is located outside the home. She heated some water with the tomatoes and other vegetables and continued feeling cold and faint. Her 4-year-old used a mingling stick, a wooden spoon, to take off the hot lid from the fire. He was also able to put it back on with the same stick.

She fainted and was awakened with her son crying over her. She told him “not to fear people” and thought that may be the last thing she said. She talked of looking up in the sky, maybe hallucinating from the illness, and seeing light and others. A neighbor eventually found her and was able to contact Pastor Cyprian Ilukol, who came to her home and took her to the hospital on his boda boda (a small motorcycle) while the neighbor, I assume, cared for the child.

Pauline was able to receive the medical attention she needed for a fee of $34, which Amy For Africa gladly provided, and she was well on the way to recovery by the time we arrived at the school on Monday. Six days later, she was singing praises and testifying to God’s graciousness in her life.

She praised the Lord for healing her on this Sunday, singing and dancing on the Lifepoint Church concrete stage and weeping about God’s goodness. That’s one of our teachers and we are thankful to have her and the others.

She broke all our hearts by showing a love for God even in the worst of situations. How many of us would praise God for malaria? He proved faithful to this woman and she wanted to publicly thank him for it the only way she knew how – in prayerful words and song and dance.

The Lifepoint praise team, the El-Shaddai Band (children’s choir) and others took turns lifting up Jesus in song and dance as the service continued. We sat in places of honor in the crowded church with metal walls that were covered with red and yellow sheets. Nearly 100 crowded into the church with another 10 or 20 looking in through doorways and still another 80 children on the grounds having children’s church. A sweet, sweet spirit was present all around and God was in this happening place.

Pastor Cyprian preached from Jeremiah 1: 6-10 about getting a message from God about what you are doing in life and how the Lord will confirm that work if you’re where He wants you to be. It was a fitting and well-delivered message.

We at Amy For Africa have confirmation about the work that is happening at Lifepoint Church and through the ministries there in Uganda. Our Christian school is growing – we are anticipating 100 students when school resumes in 2018 – and the church is becoming a beacon of light for the community and that’s where Pastor Cyprian’s heart beats strongest.

“This community needs Jesus Christ,” he told me the other day as we were looking over a plot of land that is for sell. “This is where my work for God needs to be. In this community.”

Amy Compston passionately shared how God revealed plans to her for AFA to bring Christmas to the area and she also told them about her 6-year-old son, Jarek, whose willingness to run a half marathon (13.1 miles) raised enough money to send over more than 1,000 gifts to children in Uganda at no cost to AFA.

We handed out Christmas gifts when the service was over to all who came to church on Sunday – our third gift distribution this week – and then celebrated some more with this church family that does so much with so little.

Their joyful hearts are enough to make me want to sing and dance.