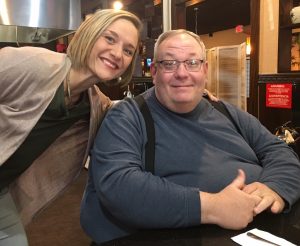 Dicky Tiller and Amy Compston are all smiles. Dicky presented AFA with a $9,000 check from the Dicky and Judy Tiller Foundation for a new school.

Even as she was dying from cancer, one of her wishes was to finance “building a school” for the Amy For Africa organization that they both loved and supported.

On Tuesday afternoon, Dicky honored those wishes by giving AFA a check for $9,000 – the approximate cost for building a new school building in Uganda – through the Dicky and Judy Tiller Foundation.

“I love missions and so did Judy,” Dicky said. “And Amy For Africa is a mission where we know the people running it, we trust them and we see that God is working through them. It couldn’t go to a better place.”

Amy Compston, the co-founder of AFA, said the Tillers’ generation donation was a blessing from heaven and further evidence that God is working.

“God continues to amaze us,” she said. “The Lord truly is laying the groundwork for a new school.”

AFA is fully sponsoring the El-Shaddai Nursery and Primary School in Njeru. They had their first kindergarten graduation in December and have added first grade to the upcoming school year that begins Jan. 29. The Christian school is blossoming, with nearly double the students from last year expected to start the new school year.

However, after adding a building for first grade, the school is running out of space.

“We are praying for land and we know He is going to provide it because He’s already provided us with the funds to build a school on it,” Compston said, referring to the donation from the Tillers. “We are so honored that this great new organization has chosen to partner with Amy For Africa.”

Judy and Amy have a connection that came long before Amy For Africa. They were in nursing school together, along with Amy’s mother Kathy Whitely, about 15 years ago. Judy and Kathy prayed often for Amy, who during that time was running as far away from God as she runs toward Him now.

Amy learned that story when she visited Judy in the hospital in Lexington only a few weeks before her death.

“God was working even then,” Amy said. “It’s amazing the connections that you find out later. I never knew. I loved Judy. She had such a sweet spirit about her.”

Judy died on Sept. 29, 2017 and her husband started the Dicky and Judy Tiller Foundation a couple of months later. Dicky wants any funding from the organization to represent a love of Christ that they both exhibited every day.

“Judy would love this, she had such a heart for missions,” said Dicky, who is the pastor of Liberty Baptist Church in Cannonsburg, Ky. “It’s a promise kept.”