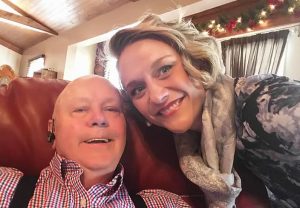 Amy Compston poses with her grandfather, Gerald Womack, who was saved after watching a Billy Graham Crusade on television in 1965.

“One day you will hear that Billy Graham has died. Don’t believe it. On that day I will be more alive than I ever will be.” – Billy Graham

By MARK MAYNARD, Amy For Africa

GREENUP, Ky. (KT) – The Rev. Billy Graham preached and reached millions in person as the most widely Christian evangelist ever heard.

But his audience also included those tuning in on radio and television.

Eighty-year-old Gerald Womack, who was born in Greenup, Ky., was saved after watching the Billy Graham Crusade on television in Tinley Park, Illinois, in 1965.

Womack was 28, a husband and father of three. He had been attending a Baptist church but it was Graham’s message that brought him to his knees – literally – and into a life that he has never regretted.

He said his mother always talked about Billy Graham so when it come on television he decided to watch it. To this day he considers it one of the best decisions he ever made.

“When I went to bed that night I was under great conviction, dreaming about stacks of Bibles,” he said. “I got out of bed on my knees and asked Christ to save me.”

“He preached on the blood of Christ and how my sins and his crucified Christ,” Womack said of Graham’s message that night where he was watching with his wife. “Billy Graham always spoke plain but powerfully. It was a half-hour sermon but spirit-filled.”

Womack’s family remains involved in church work all these decades later, he said.

He has six grandchildren and 14 great grandchildren and all of them go to church, he said. One of Womack’s granddaughters, Amy Compston, is the co-founder and missionary of the Amy For Africa mission work in Uganda.

“Amy is a great blessing,” he said. “God is burning in her heart.”

Womack became a soul winner – “I’ve always been bold when it comes to Christ,” he said – and even built a church around 1980 after moving back to Greenup the first time in 1977. He later moved back to Illinois and recently returned to Greenup where he lives now about a quarter-mile from the log cabin where he was born.

“God knows how to reach us wherever we are,” he said.