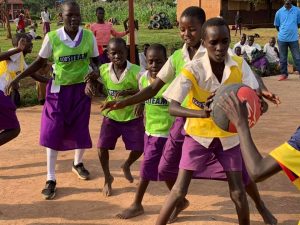 JINJA, UGANDA – Amy For Africa celebrates with each precious soul that comes to know Jesus.

When 25 children come to that saving grace as they did on Saturday, well, it’s shoutin’ time! That’s what happened during AFA’s inaugural basketball clinic where squeals of delight could be heard before, during and after games. But before the tournament was played, the gospel was presented and the response was incredible. 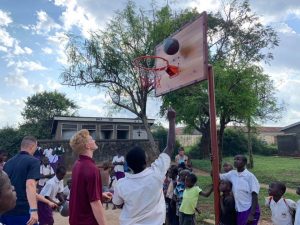 “We must praise God for 25 souls accepted Jesus as their Lord and Savior!” AFA co-founder Amy Compston wrote on Facebook. “What an incredible way to close out the first AFA basketball clinic!”

Not only that but the children were craving a copy of God’s Word. Because of Bibles For Him, AFA had plenty to hand out.

“Bible! Bible!” they shouted to the AFA team. Thirty-eight were given to the children, who treasured each 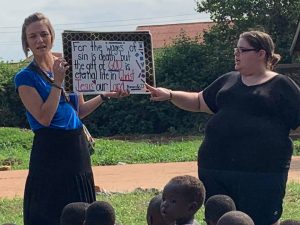 “So many children said their memory verse … more than I could count,” said Compston. “It was amazing hearing people scream with excitement ‘Bible! Bible!’’’

AFA prayerfully puts mission teams together with the like-minded goal of adding to the Kingdom of God.

The basketball clinic has been a project talked about for some time. AFA paid to have the concrete court laid and the children flocked to learn the game from 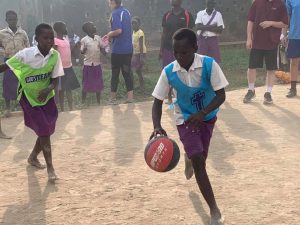 “The Lord poured his spirit on the entire basketball clinic,” Compston said. “Our entire team would agree it’s been amazing to be a part of.”

Teenagers came to watch the younger ones play basketball and will get their chance to play next week. Luke Paulus, one of the nine team members, taught them some basics.

“I’m forever thankful for this team that God has put together,” said Compston, who also said the leadership of AFA country partners Masenge Godfrey and Pastor Cyprian Illukol made it all happen. “You guys are a blessing! Praise God for an amazing day!”

The total of salvations for the day numbered 26 after a clerk at the hotel where the AFA team was staying accepted Christ during a Bible study.