AFA finds favor in partnership with our Ugandan pastor 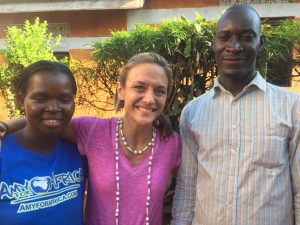 Amy Compston stands between Cyprian and Scovia Iliukol on Nov. 27, 2017.

NJERU, Uganda – Today was a day for reuniting for the Amy For Africa families in America and Uganda.

The smiles as long as the Nile River and the warm embraces between Chris and Amy Compston and Cyprian Ilukol and wife Scovia were sights to behold as the AFA team arrived at Life Point Church and the El-Shaddi Nursery and Primary Schools, which also happens to be the home of the Ilukols, who also farm pigs and some cattle.

Chris and Amy and Rob Barber, our talented videographer whose films from Uganda can bring you to tears in a split second and aid us in telling the story so vividly, first met in January of this year and it was then and there that Amy found another purpose, another life even, for the four-year-old mission organization that she started in 2013. Amy can be impulsive, and this time she got it right, by insisting that Cyprian Ilukol be our partner in this mission.

You have to meet Cyprian Ilukol only once to understand his pure heart for serving God. There is no other reason he and his wife do what they do for this small community. It’s not unheard of for them to feed more than 70 people each and every day. After tasting her delicious cooking on Tuesday, a meal that included beans, greens and taters, I call those people blessed.

Cyprian, his children, the school teachers and others greeted us with warmth as the 10-member mission team came off the bus. For Chris, Amy and Rob, they said it was “like coming home.” None of the rest of us felt like visitors either. That’s because there is a sweet, sweet spirit in this place like you don’t find in America.

It starts with Cyprian and Scovia. They are hard-working Ugandans who love the work they do and it shows. Mostly, though, they love the Lord and are obedient to his calling on their lives. They don’t have it easy and they’re not complaining. Instead, they praise God at every turn for all that He has done for them. He has given them purpose, too, and God has done it by partnering them with Amy For Africa. We know it, they know it, and it’s great.

Forty-two suitcases full of gifts filled his tiny church that is parallel to his home and adjacent to the school. The three buildings are fit neatly into about 8,000 square feet on about a quarter acre of land. He has made the most of every inch of it and every inch has been blessed of God.

Cyprian and Scovia are the hands and feet for AFA in Uganda. We can’t be there often although Amy has blazed three trips this year. But even with Amy there for a total of about two months in all the trips combined, that’s a small percentage of the year. Because of that we needed someone who had our full trust to run the mission for us in Uganda. We found that person in Cyprian Ilukol, a man of highest integrity and a man of God.

This is my first time meeting Cyprian and his wife although we’ve spoken through Facebook countless times. My heart melted and an immediate bond was made complete now that we can look each other in the eyes. A one-word description of him would be humble. He is a graduate of Global Theological Seminary which Harold Cathey started in the 1990s to teach young preachers. Without the influence of Harold and Beverly Cathey, there would be no AFA in Uganda. Their footprint is huge.

And it’s not just me. Everybody else on the trip had a similar impression.

Our workload on Monday was heavy as we began assembling the Christmas presents for three separate distributions, beginning with the children at the school on Tuesday. This mission team has been prayed over and over and over again. We got it right. They are dedicated to the task at hand. Everybody worked hard, worked together and worked for our good, good Father.

It was also a good, good day.