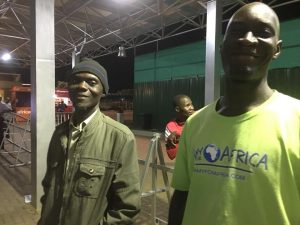 At left is Moses, our driver, and beside him is Cyprian Illukol, our pastor and school leader.

ENTEBBE – When you’re on a journey some 8,000 miles away, there’s simply no easy way to get there.

For the 24 hours it takes to travel that distance, time almost disappears. It marches on to its own slow beat. Seconds seem like hours and the day becomes blurred and eventually lost. The actual time of the day doesn’t matter either because you are crossing into so many other time zones.

I’m on a mission trip with nine others to Uganda with Amy For Africa, an organization that I co-founded with marathoner runner Amy Compston in 2013 and one that has brought me closer to God than I ever thought imaginable. We will be on the ground in the Jinja area for the next two weeks, spreading hope and God’s love in a dark place but where light, the light of Jesus, is beginning to shine.

I have learned from previous mission trips to Uganda that you have to mentally prepare yourself for what you are about to witness because it’s nothing like you’ve likely ever seen in the United States. I’m sure it’s the same for other Third World countries.

You will see stark poverty and starving children.

You will see children dressed in rags or sometimes nothing at all.

And you will also see God in the midst of it all.

The Christian school that Amy For Africa fully operates financially has its first kindergarten graduation on Dec. 9 and that’s one of the main reasons we chose this particular time to visit. It may not seem like a big deal in America, but in Uganda, where any schooling a child receives come at great cost to families, it is a big deal. Most children never set foot in a classroom. Ours go for free.

We have been blessed with tremendous partners in Uganda, men and women of God who fully embrace and believe the Bible as the inspired Word of God. They preach it and they teach it. The children at the El-Shaddai Nursery and Primary School are receiving not only a quality education (they can recite Bible verses from memory in two languages at 5 years old) but a Christian one as well.

We understand the evil that we face on the mission field and go forward boldy dressed in the full armor of God. Our team is ready to introduce these people to Jesus Christ whenever the opportunity presents itself and we are certain there will be many. Our prayer is that we will not be hindered in any way and that God’s Word will show itself in the glory designed.

Our luggage going over to Uganda included 59 suitcases and trunks of 50 pounds apiece that contain more than 1,000 gifts that will be distributed to children (and adults) who have never experienced Christmas. But these “free gifts” will come only after we share about God’s “free gift” to each and every person.

We have already watched God work in mighty ways. Seventeen of our bags didn’t make it but will be sent on Tuesday. We could in no way have managed to put 17 more bags on the vehicle that our Ugandan partners brought us.

We’ve seen God’s hand on us in other ways as we make this numbing 24-hour flight to the other side of the world. The Delta agent who checked our bags at the Pittsburgh International Airport was touched by what was going to happen and gave us a $2,000 discount. It also told us one of our bags, which we intended on leaving and that costs us only $1, was a collector bag that may bring us another $1,000 on eBay. So that one is coming back home.

It is beyond unimaginable what God has already done in preparing for this trip. Those gifts that filled nearly 60 bags? They were all donations. The cost for shipping those bags? A 6-year-old little boy (Amy’s son) raised nearly $12,000 – more than double what we needed – by running a half marathon with his mother.

We know God is going to meet us in Uganda because he’s already with us.