AFA finds new partner: ‘This is where God wants us to be’ 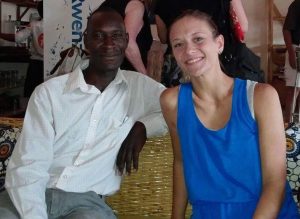 Cyprian Illukol with Amy Compston in 2014.

ASHLAND, Ky. — Amy For Africa has a new Ugandan mission partner in the El-Shaddai Kindergarten & Primary School near Jinja.

Cyprian Illukol, the church pastor and school coordinator, said during a parent’s meeting earlier this week they were giving out report cards to their children.

The new school has grown from 16 to 51 students through the help of donations collected during the AFA Wiffle Ball Tournament last month. The partnership was certainly God ordered through some chance meetings between Amy Compston and Cyprian in the fall of 2014.

Little did Amy know then that she would later be able to help him develop a Bible-teaching school.

“But our plans aren’t always God’s plans,” Amy said. “We at AFA have experienced that time and time again. AFA feels led to reach out to Cyprian and provide him with some funds to grow this school into something special. We know lives will be changed as these sweet children get the education and an introduction to Jesus that they deserve. This is where God wants us to be for now.”

“For now, we’re going in a different direction and we’re so thankful to be supporting Cyprian’s new school ministry,” Compston said. “We’ve prayed about where the Lord can best use us.”

“AFA has restored hope to these children who were not schooling,” Cyprian posted on his Facebook page. “AFA is paying for their school fees, uniform, shoes and scholastic materials.”

The Sunday after the dues were paid for the children their parents showed up at Cyprian’s church, adding to the flock he is shepherding. When more asked if their children could attend the school, AFA found a way to fund it.

Because of a fun-filled Saturday afternoon of playing Wiffle ball in Ashland, Kentucky, a new school full of activity has been born.

“God supplies in ways we can never imagine,” Compston said. “This is another example of how He works in mighty ways. We are so encouraged and so excited to be part of this school and pray that these children can learn about Jesus Christ and take that message out in the future.”

Amy and her husband, Chris, are almost fully recovered from malaria that they came home with in June. Neither is completely back to running at full speed but are slowly being restored.

The illnesses slowed the work of AFA briefly but it also gave Amy some time to understand to examine everything that has happened the past three years. She is as fully committed to the mission — and to Jesus — as ever and looks forward to serving both in the United States and Uganda in the days ahead.

Cyprian has been joyfully thanking the Lord for the partnership with his new friends from the United States almost daily.

“How shall we ever thank you enough for all you’ve done and continue to do in this community of illiterate and impoverished people?” he said. “In this partnership, we see God fulfilling His word through AFA! ”

“If you could see my face right now, you would see a look of gratitude!”

AFA has a look of joy, too, with the encouragement that comes from a dear brother in Christ and children who are given the hope that comes through knowing Jesus Christ.

“We hope to extend AFA’s goals through this partnership by investing in the children and other avenues that shall be considered by AFA,” Compston said. “We will seek God’s will in everything we do.”

Amy For Africa will begin speaking in churches again in September. Call Mark at (606) 571-1031 to schedule Amy.