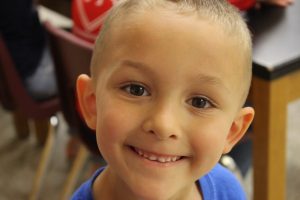 ASHLAND, Ky. — Jarek Compston has a love of Jesus, Ugandan children and running.

No, the apple didn’t fall far from the tree.

The 5-year-old son of Chris and Amy Compston of the Amy For Africa mission will be running a 10K for the first time in the inaugural Mission: Education race on Saturday morning in the streets of Kenova.

The youngest AFA runner doesn’t want his effort to be for fun only. His plan is to raise enough money to purchase 100 Lugandan Bibles for his mom and dad to take with them to Uganda in January. The Bibles are $10.50 apiece in Jinja, not far from where AFA is considering planting another school.

Here’s the plan for Jarek’s Bible Run. He’s asking for sponsors to give him $2 for every mile he completes — a total of $12 if he finishes the 6.2 mile course. He would take 95 to 100 sponsors to have enough to purchase 100 Bibles that students, teachers and others could use to learn about Jesus.

Alan Osuch of Tri-State Racers said he’s never had anyone that young attempt to run a 10K since he’s being doing road races. But nobody is doubting he can do it.

Jarek has been running with his mother and has completed several 5Ks. His first one, with his mom and dad, came in the Turkey Trot on Thanksgiving Day in Russell last November.

Jarek is running elementary cross country for Crabbe, competing against runners twice his age. He has his mile pace under 10 minutes and typically finishes in the middle of the pack, his mother said.

Anyone wishing to sponsor Jarek can do so by donating online at amyforafrica.com and noting Jarek in the message. We will keep a running total on Amy For Africa.

The Mission: Education run is sponsored by The Daily Independent with some of the proceeds benefiting AFA. The 10K begins at 8:30 and the 5K will be afterward.