Amy and Chris sit between Cyprian Illukol, the pastor. 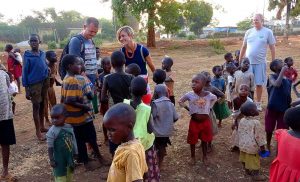 Amy and Chris Compston with the children in Uganda.

ASHLAND, Ky. – Amy For Africa is growing and going.

The faith-based organization is operating a new school in Uganda with the help of pastor Cyprian Illukol, just outside the town of Jinja, and also undergoing changes within the organization as Amy Compston, a co-founder and namesake of Amy For Africa, becomes a fulltime paid employee starting March 15.

Compston has resigned her position as a nurse with King’s Daughters Medical Center after receiving what she says “is a clear call from God” to devote all of her time to AFA.

“God made it very clear to me. He wanted all of me, not part of me,” she said. “I’m at perfect peace with the decision. Chris (her husband) and I both are. It’s the peace that passes all understanding.”

Amy’s new role will allow her to be available to make trips to Uganda whenever the need arises. With the organization taking a bigger role in operating the El-Shaddai Nursery and Primary School, the need for having boots on the ground becomes more necessary, said AFA President Mark Maynard.

“Anybody who knows Amy understands the passion she has for God and for this ministry,” he said. “She’s always been a fulltime ‘employee’ for us before but now we’ll be able to give her a salary. She has essentially worked two fulltime jobs since we started Amy For Africa – one with us and one as a nurse at the hospital where she is so highly respected and a 13-year career veteran.”

Compston and Maynard began AFA in May of 2013 after she returned from the Boston Marathon. God, in His own way, asked her to “run for missions” and they started a “fundraiser” that has turned into a foundation that has helped reach thousands for Jesus in Uganda.

AFA provided funding for six schools in the Moyo area of Uganda from 2013 to 2016. However, the organization separated from the United Christian Expeditions in June of 2016. A chance meeting between Cyprian and Amy in the summer of 2014 led to the support for the new school.

Amy, her husband and three others visited the El-Shaddai area in January and Amy came away with the vision of continuing to support the school with funding with an eye toward building “the best school in Uganda” in the coming years.

The organization will also be helping children in what is called the “Ghetto area” outside Jinja where many of the impoverished have simply nothing.

“My heart breaks for those sweet children,” she said. “We are going to help them.”

Amy is also the main speaker for the organization and spends hours preparing as she studies God’s word. “I want to make sure I’m as close to Him as possible,” she said. “There’s the mental stress of hearing all the Ugandans’ needs almost daily and sifting through them, praying over them and seeking God’s will for them.”

Amy will plan and pray over the AFA mission trips and, of course, speak whenever called upon. She has spoken at churches, schools, detention centers, halfway houses, civic clubs, taught discipleship classes and shared her testimony with anyone within earshot. Much of what she has done has come with only a few hours of sleep.

“I’m not sure people understand how many times Amy would go speak to a church after working a midnight shift,” Maynard said. “She has been dedicated first to God and Amy For Africa. Her family, which includes Chris and four children, deserve a chance to love on her. Having her become fulltime with us will allow her to do that and make our organization even stronger.”

Amy says the fulltime call to the AFA ministry is “something we knew was coming. I know God is in this and He will take care of us. People probably think I’m crazy but when God speaks, you have to listen and obey. That’s what I’m doing.”