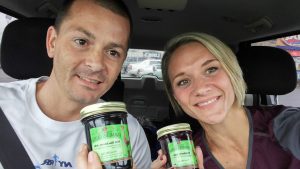 Chris and Amy Compston each received a jar of jam and jelly for finishing the 30-mile Iron Mountain Trail Run in Damascus, Virginia, on Saturday, Sept. 2, 2017.

Not even on her birthday.

Amy and husband Chris Compston represented Amy For Africa well in the Iron Mountain Trail Run on Saturday, celebrating her 33rd birthday in perfect Amy Compston style – by running up a mountain. Both of them conquered the mountains, rocks and mud during the 30-mile race that included some cold rain, as if it weren’t tough enough.

Amy was typically strong and competitive, finishing ninth among the females. There were more than 100 runners in the competition, including many experienced mountain runners.

“Chris and I stayed together the first 16 miles, but then he said go on,” Amy said.

“She blew me away,” Chris said.

They had met another runner before the race named Chad, who had participated in two Boston Marathons and other ultra runs. “He paced me until the last eight miles and then told me to go if I could,” Amy said.

“I held back too much the first half,” she said. “I played it safe since training was so sketchy.”

Chad, her pace runner, came in at 5:50 and Chris finished at 6:20. “I forgot how much this hurt,” Chris said. “It was rough but not nearly as bad as the (West Virginia) Trilogy.”

Chris and Amy ran in the trilogy two years ago. It is a grueling three-day, 94 miles of racing in the highest mountains of West Virginia.

“Chris fell once and we both almost fell a ton of times,” Amy said. “But this didn’t compare to the difficulty of the West Virginia Trilogy.”

For finishing the race, Chris and Amy each received a jar of jelly or jam.

Amy will be speaking at a home church on Sunday after they met a couple while checking into a cabin on Friday night. They went to Shelbyville, Kentucky, on Thursday so Amy could speak to the Shelby County Drug Court and a recovery center there.

“God has opened so many doors for us on this trip,” she said. “We’re so thankful.”