The award honors women who have overcome obstacles to positively impact the community. The program is administered by the Middletown Community Foundation and funded by the AK Steel Foundation. 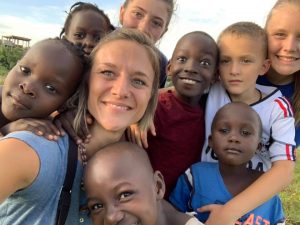 “The AK Steel Foundation is proud to sponsor the Steel Magnolia Awards to honor women who have overcome adversity and serve as shining examples to others giving back to the community,” said Roger K. Newport, Chief Executive Officer of AK Steel.

“As happens each year, our independent judges review public nominations of many outstanding women who have overcome adversity and have contributed immensely to their communities,” she said. “Each nominee is very deserving of recognition.”

Nominated by Mark Maynard, Compston is said to be a “world changer.” After overcoming drug and alcohol addictions, Compston leads the non-profit organization AFA or Amy for Africa.

According to Maynard, Compston’s organization helped to start six schools in Moyo and is currently operating the AFA Christian Academy in Njeru, Uganda. Compston spends between 10-12 weeks on the field in Uganda. When she is not in Africa she also speaks regularly in her community about ways to overcome and combat drug addiction.

A book about her life, Grace Runner, was published in 2015 and is being used in a college course in Cincinnati.

Amy will receive $2,500 from the AK Steel Foundation for her charity of choice, Amy for Africa.

The Steel Magnolia Award honors women of all ages who face personal adversity and have shown exceptional strength, courage, compassion and leadership through their work in support of their communities.

Nominations by essay were solicited from the public in each of the 13 communities where AK Steel operates a facility. Nominees were required to live near an AK Steel facility.

Nominators and nominees did not have to be associated in any way with employees of AK Steel.  Nomination forms for the 2020 Steel Magnolia Awards will be available in Summer 2020.