Dance party erupts at the end of a beautiful day 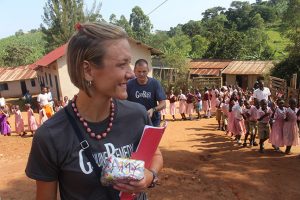 ISHAKA, Uganda – After serving up some 650 meals, passing out 360 gifts and watching and participating in a 5½-hour Ugandan school showcase program, what did Chris and Amy Compston want to do?

Why, they wanted to dance.

And the party that began with a long and warm street welcome with children cheerfully clapping and singing for the Amy For Africa mission team ended with a bang with Chris and Amy celebrating in Ugandan mob dance style with 61 orphans from the Karama Preparatory Primary School. It was a beautiful sight to behold.

It was a USA Dance Party in Uganda.

AFA has found sponsors for the 61 orphans, including 30 at Oakland Avenue Baptist Church in Catlettsburg, Ky., for the 2017 school year that just ended. The orphans waited patiently as photos were taken of each one, so Amy could try to secure sponsorships for another year. (Message her on Facebook if you are interested!)

When we finished taking the photos and giving the orphans their gifts, a Ugandan boy band spearheaded by Osborne David sang contemporary worship music, but with an African flare and a beat that can’t keep feet still. David had some high-jumping antics of his own while dancing and singing, energizing anybody who got even a glimpse of his act.

Pastor Blazio, who is 59, was on the floor swaying too, but he covered his ears with his hands as the music got louder and louder. (In fairness, Blazio was standing right in front of the speakers so maybe covering the ears was out of necessity).

Chris was the first to start dancing, Amy followed seconds later and the party was on. All the orphans and anyone else left in the building jammed their way onto the dance floor and the smiles throughout were contagious as the music reverberated through the building with a metal roof. They played for about 15 minutes straight before closing out a nine-hour day for the AFA team.

It was not just a good day, but a great one.

Ugandans like their programs, as they call them, and this one included skits and dances from all the classes, speeches from dignitaries and traditional Ugandan songs being performed. They also shined a bright light on the AFA team from the United States that Pastor Blazio, who started the school in 2005, said kept the school afloat in 2017.

AFA began partnering with Karama last December and took on the school fees for the orphans at the school. Blazio said the school was on the verge of closing before AFA came to the rescue.

“God told me last December to ask Blazio if he needed anything,” Amy said. “So that’s what I did.”

AFA was invited to participate in the program with Pastor Mike Blankenship delivering a gospel message and Amy Compston sharing the love of Jesus with the school as well during team introductions and later in some closing remarks when she told the packed church how God had guided her to collect Christmas gifts for all the students.

Not only that but because of the success of her son Jarek’s half marathon last month, AFA was able to purchase meals for every student and their parents, the teachers and staff. The Ugandans were mostly surprised that the mission team also served up the meal behind the church.

The meal came after AFA handed out Christmas gifts to the students that came from generous donations throughout the Ashland, Ky., area. The team took over more than 1,000 gifts and passed out each one in three separate distributions. Tuesday’s trip to Karama was the last one and the most well organized and for that we were thankful.

It was an emotional day for the mission team, which drove nine hours from Jinja to the Bushenyi district on Monday, to be at the school.

Several of those from the area who “adopted” orphans also sent extra gifts for them and they were given out as well. Brent McKee, one of the AFA team members, had more than 100 gifts wrapped up from his family alone. They also sponsored two students, including a girl named Tina. She was sitting next to him wearing her new rainbow toboggan and clutching two shirts like they were the best gifts she’d ever received (and maybe they were). Brent and his wife adopted four children in the U.S. recently. He would have taken home Tina if he could.

Chris Compston had a similar experience with another little girl who received a beautiful gift-wrapped present from her sponsor, Patty Moore. The little girl hadn’t opened the gift, maybe figuring this pretty box was the gift. Chris told her to take off the paper and two of her friends translated for him. He showed them how to start tearing off an edge and they began slowly taking off the paper. Then he “What she found inside was a Barbie doll case, and she clutched it close to her. Then Chris showed her the latch and when she opened the door to find multiple dolls and clothes inside, the look on her face made his face light up.

“I’ve never seen anybody any happier over a gift,” he said. “It was great.”

We were told by several church members that this was one of the best days they could remember and that the community will be talking about this day “for weeks to come.” What a testimony to God’s power and greatness!

God showed up in that church in many ways. The gospel message was convincingly preached not only by Pastor Blankenship but Amy and Pastor Blazio, who has been a preacher in Ugandan since 1990 after graduating from Global Theological Seminary.

He studied under Rev. Harold Cathey and is one of Global’s most accomplished graduates.

“Tell Harold Cathey his work is still going on,” Blazio said. “The preachers are still preaching the word of God. He started a good thing and it’s still going strong.”