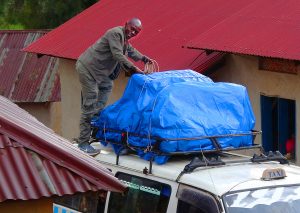 JINJA, Uganda – Moses has been guiding the Amy For Africa mission team since our arrival in Uganda.

We couldn’t be in better hands.

Moses Waiswa is a skilled bus driver who safely navigated us through some bumpy and sometimes slippery terrain on our journey from Jinja to Ishaka in the Busheyni District. It is about a 9- to 10-hour drive across country – most of it highway – in a small travel van.

Amy Compston, who leads the mission team, said Moses is responsible for anything to do with travel. His word is the final word, she said.

“I have complete trust in Moses,” she said. “He tells us when we leave, how long it’s going to take to get there and what kind of vehicle we’re going to use. It’s all in his hands.”

With AFA mission member Rob Barber riding beside him, Moses gives all of us a reason to feel safe.

Both on Monday, when we traveled to Ishaka, and then Wednesday, when we came back to Jinja, the departure time was 5 a.m., despite some grumblings from the spoiled American missionary team. We were packed in tightly in the van I dubbed the “Mystery Machine” because it looked similar to the one on the Scooby-Do cartoon.

In Uganda, as a way to slow traffic and lessen accidents, speed humps are placed every five to six miles and sometimes closer and often multiplying in annoying combinations of bumps. Our missionary team grew to loathe those speed bumps.

Just when you got a little bit comfortable, which was hard to do, a speed bump when come and off the seat you’d go. Moses was always aware of what was coming and made it as easy as possible on the Muzungus who never got used to it but appreciated his effort.

Ugandans must be used to them and understand the importance. A plan to remove the road humps throughout the East African country to better accommodate transport trucks has been met with resistance from residents who fear it will add to more traffic accidents. Even with the speed humps, the country has an abysmal safety record with nine traffic deaths a day on average.

At least 9,572 people have died in motor vehicle accidents the last three years countrywide, according to a performance report from the Ministry of Works and Transport.

Those kind of numbers make it even more important to have a driver that can be trusted with safety, Compston said. “He literally has our lives in his hands,” she said.

Not only are there humps but they are followed by the rumble strips that lead to even more discomfort.

Moses pushes on, never flinching as Barber kept him entertained in the side beside him.

His deft driving skills were put to the test on the route to the church where we were meeting on Tuesday. The dirt road was filled with potholes – some more like craters – and the church was located on a mountaintop. On the way up, we had to get out of the van and walk a ways when it wouldn’t pull the steep road. That happened to us twice.

During the church service a heavy rain fell and each of us wondered what that was going to do to our travel down the mountain. It was muddy and slick but Moses kept us from getting stuck and navigated around several other vehicles and boda bodas who were coming down with us. He followed some of Barber’s advice of not stopping the van no matter what.

“I knew if he stopped, there would be 10 of us pushing that van with the wheels spinning and mud flying all over us – and that would not be good,” Barber said. “I talked to him about how we drive on ice and snow in Kentucky and how it’s important to not stop. He listened to me and did a great job getting us off that mountain.”

Moses, who speaks five languages, was introduced to Amy on a trip in January. She appreciates his driving skills, but even more appreciates that he is a man of God. He is a professional driver who knows well his way around Uganda. A smallish built man, he eats and also has the strength of a bigger man.

He hefted large duffel bags stuffed with gifts from the top of the van on Tuesday without any assistance. The bags weighed a minimum of 50 pounds apiece.

“He works hard and get us places safely,” Amy said. “I don’t know what we’d do without him. We consider him one of our team members. We love our Moses.”