Taking Jesus door-to-door through the villages in Njeru 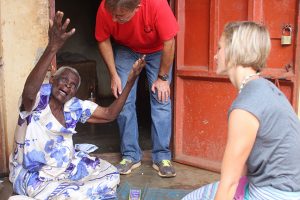 This Ugandan woman was crying out to God for help during our door-to-door evangelism on Friday.

Ten Muzungus followed the lead of Pastor Cyprian Ilukol through the villages near Lifepoint Church, moving along narrow dirt paths, past cornstalks and dirt roads to half a dozen or more destinations.

Upon arriving at the homes, which are mostly one-room buildings, we found some who praised Jesus and some who felt like God had forgotten them. But we prayed with every one of them, asking if there was anything they’d like us to pray over, or how we could help them. Every one of them had requests and needs.

Pastor Cyprian translated for us, allowing us to ask questions about everything from their age to their salvation. At least two of the women we prayed with said it was a “miracle” that we showed up. They live near enough to Lifepoint Church, where Pastor Cyprian leads, that they have heard about Amy For Africa.

One sweet sister who participated in a conference over the summer where Amy taught them discipleship lessons and had them memorize Bible verses was excited to reunite. She was able to recite three of verses for Amy without hesitation. She was one of her best pupils, Amy said, memorizing all nine verses as part of the summer training.

People in this village light up at the sight or mention of Amy. The children scream for her along the road “Aimee!! Aimee!!” as our vans rolls past them. When this woman who had been faithful to the lessons this summer saw her, she jumped up and hugged her, so thrilled to see her again.

Make no mistake, Amy For Africa – and especially Amy Compston – has a footprint in this part of Uganda that’s growing by the minute. They are beginning to spell hope A-F-A.

Our visitation afternoon lasted about three hours and took us through some heartbreaking moments. We were fortunate to have another pastor, Mike Blankenship, along with us. He went in full pastor mode during the door-to-door evangelism. Pastor Mike was such a huge blessing today in knowing what to say on several occasions and he offered the prayer on most of the stops.

The first home we came upon had an elderly woman, all bent over, hoeing in the garden. Pastor Cyprian spoke with her by himself at first and then one by one we went over to her and shook hands. She was honored that we had come and invited us into her house. She would be considered someone who is crippled in America but, in Uganda, you just keep moving.

There were two big steps into her home and we offered to help but she resisted. She practically crawled up to where she could reach a wooden chair and pull herself up the rest of the way. Inside her “home” was the one room. There were mats and no chairs. Her children were no longer around and didn’t keep up with her and she had a grandchild in the village who helped some to feed her. The gray-haired woman told us she was 90 but Pastor Cyprian said that was not correct. “Much, much more,” he said. “Probably 100 or more.”

You can’t help but wonder how she survives day to day.

We came upon another home where we first talked to a 62-year-old man who looked much older. He showed us a bulging hernia that was keeping him from doing much. He pointed toward his home and asked us to see his mother, who was sitting on the porch and moaning. She was screaming out to God and crying because her daughters were at odds with each other. The woman said God had forgotten her. We assured it that wasn’t the case. She was a woman who had a received a Bible in Luganda on an AFA trip in January and rushed inside to get it. She brought out two Bibles, put them on the porch and pounded them with her hands, still screaming and asking where she could find the answers to her problems. It was heartbreaking to witness.

Pastor Mike quickly gave her three verses of encouragement that Pastor Cyprian wrote in her Bible and it seemed to calm her down. Mike and Amy prayed with her, Amy crawling up close and wrapping her arms around her. That seemed to help her even more.

We also went to a building where many men of the area had congregated and that was where much drinking of alcohol was taking place. It was the perfect place to witness, so we sat down on benches and did just that. Not everybody was drunk – after all, it was only about 11 in the morning – but there were some who had already started.

From the street in front of Lifepoint Church you’d never imagine there was that much life on the trails around him. But usually where this is one home, two or three more are nudged close together. Goats and chickens can be found and an endless amount of children are running and playing in that community.

It’s no wonder why Pastor Cyprian has such a heart for this community and why he started a Christian school, the El-Shaddai Nursery and Primary School, that will have its first graduation ceremony on Saturday.

Let me just say this: It’s going to be a big deal. Festivities begin early, before 10, with a marching band. More than 500 are expected to come from the community to watch the ceremony. The nursery school has 51 students but only about 10 graduate from the top age class. It’s a first not only for El-Shaddai but also this community of people. We hope it’s only the beginning.

This is the school that Amy For Africa has chosen to partner by providing student fees for every child, teacher salaries for the year, supplies and any other needs that might arise. We chose this time to send a mission team over because they wanted us there for the inaugural school graduation.

It will be a sight to behold and a heartwarming story to tell. The workers around the church were expected to be there late into the night and back early Saturday morning in preparation of the biggest day this area of Njeru has ever witnessed.

We saw some heartache on the journey through the villages on Friday, but a new day of joy dawns with this special graduation.

This much we know: God will be glorified.