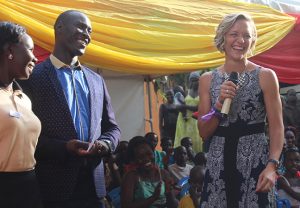 Amy with Pastor Cyprian at the graduation ceremony on Saturday.

NJERU, Uganda – In what may have been the grandest kindergarten graduation ever – and that’s not overstating the case by much – the El-Shaddai Primary and Nursery School put on a seven-hour extravaganza Saturday that will be hard to top.

Ten students from the Top Class will move on to P-1 (first grade) in what surely was the most memorable day of their young lives. El-Shaddai, the school located on the grounds of the Lifepoint Church, is sponsored fully through Amy For Africa.

The Christian organization pays students fees, teacher salaries, staff salaries and more. The 4½-year-old ministry’s goal is to reach thousands for Jesus Christ, be it in Uganda or the United States or other parts of the world.

Hundreds came to the graduation celebration from within the small village located on the outskirts of Jinja, one of the largest cities in Uganda. This was the first graduation at El-Shaddai and word had spread that it was going to be big. Mission accomplished.

“That’s what I like about Pastor Cyprian,” said Amy Compston, the face of AFA. “He does things in a big way, just like AFA. I love it.”

Amy was right. It was a big deal and the children were made to feel extra special with so much attention. The day started late because of some heavy overnight and morning rain, but it didn’t detour the crew from the school. They worked throughout the night and into Saturday morning to prepare the grounds and food for more than 500. AFA provided the funds for the celebration and they provided the hard work.

“They wanted to make the first graduation in the history of this village something special and we wanted to help them,” Compston said. “I think that goal was easily achieved.”

Six of the 10 making up this AFA mission team participated in a pre-ceremony parade that started a mile from the school and was complete with a uniformed marching band. The drums kept cadence and the brass blared out some songs. The band looked a little like the “Mayberry Band” of Andy Griffith fame but they sounded good. The cymbals had some rough edges and the other instruments looked a little used. However, they made it work. Ugandans know how to make things work.

Fifty-one students from the school gathered at the end of the road with several adults, including some parents. The little ones had their faces painted and were dressed in their green school uniforms. They marched up the dirt road with so much pride in their step. Others carried banners for Lifepoint Church, El-Shaddai School and even Amy For Africa, which they had made for us.

It mattered not that the road was full of mud holes from the overnight thunderstorms. They plodded around and through it on the way to the church. It was something to see.

Amy’s husband Chris and I had dressed for the graduation in the best we brought including long sleeves and a tie. Humidity after the rain brought out some oppressive heat. I was wringing wet with sweat by the time we walked the one mile down the road and then marched back the same one mile to the church.

But my shirt had plenty of time to dry with about five hours of ceremony awaiting us.

The children from each of the classes, led by their precious teachers, performed songs, academic skills and recited Bible verses and poems. These 3- to 5-year-olds were so smart and incredibly well-behaved especially with a large audience surrounding them. Nobody was shy about performing. Estimates of 450 to 500 was in the ballpark of how many came to the graduation.

Dignitaries offered speeches and Amy and I also were given the opportunity to talk about Amy For Africa and Jesus Christ in an area where the Muslim religion is thick. Nothing was said to us and Pastor Cyprian makes it clear this is a Christian school and students attending there, including ones with Muslim backgrounds, will be taught through the Holy Bible.

The 10 Muzungus (white people) from America were treated with dignity and respect the entire trip. In fact, if anything, they pampered us. The marching band even played the United States national anthem as Mike Blankenship and I performed a never-rehearsed duet – and it wasn’t bad.

Pastor Cyprian asked Amy to sing, but she quickly pointed my way. I recruited Mike, the pastor at Oakland Avenue Baptist Church who frequently sings the anthem at Boyd County High School sporting events where he serves as the public address announcer. We made it through it on pitch (at least that’s what we were told).

The day was certainly filled with entertainment, including the master of ceremonies and a translator, who could have moved things a little quicker. Nevertheless, no one was complaining. They brought in other dancing, singing and drumming acts to keep everyone entertained for the afternoon.

Pastor Cyprian had Amy and I, with the help of the graduates, cut through a huge cake and then we passed out graduation certificates to the children.

After that it was time to run 500 people through a chow line that included three different meats – chicken, turkey and beef – white rice, potatoes, yams, cole slaw and a soda pop. And it went amazingly smooth.

Several parents came up to AFA mission team members afterward, thanking us for the support and high quality education their children were receiving.

El-Shaddai will be adding a Primary 1 class (first grade) when the school year starts in January and plans on continuing to add classes one at a time in subsequent years.

Pastor Cyprian said the biggest problem the school faces is space. They will build another classroom but are quickly running out of room. More than 100 students are expected to be enrolled in the next school year. He said none of what has happened would be possible without the Amy For Africa partnership.

“We are changing this community through the school,” Pastor Cyprian said. “These people have some money in their pockets because Amy For Africa is paying the school fees for their children. It is allowing them to shine.”

Saturday was certainly a day where El-Shaddai school shined brighter than it ever did.