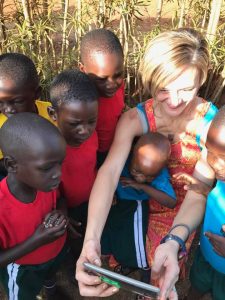 Amy and Cyprian meet in his office at the school near Jinja. 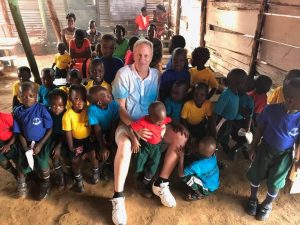 Rob VanHoose and some of his new friends in Uganda.

JINJA, Uganda – It has been an exciting, adventurous and fruitful first week in Uganda for the five-member Amy For Africa team.

It started before they even got off the plane when Amy Compston was able to give two missionaries to Uganda a needed donation after speaking with them while traveling.

The woman asked Amy, “How did you know?’’ and proceeded to tell her that they had recently been robbed of everything.

She answered: “I didn’t but God did and He told me to give.”

After arriving in Entebbe and spending the night they traveled to the nursery school near Jinja where AFA is considering being a fulltime partner. What they found was Pastor Cyprian Ilukol, who administers the school, is a true man of God who loves the Lord with all his heart.

He left his job to attend Global Theological Seminary and study the Bible despite being his family’s only provider. His wife was pregnant but she encouraged him to “do what God said.”

He was able to work to pay off tuition but feeding his family became difficult. He told the team that there were times when he went through garbage cans for food to feed his family. Cyprian earned a teaching diploma, the highest degree in Uganda.

The team visited Cyprian’s home and found the family “humble and seem to truly love the Lord,” Amy said.

The next day they visited the El Shaddai Nursery School that AFA has been helping since last fall. What they found were students quoting multiple Bible verses, doing skits about Jesus and singing songs about Jesus. They also prayed for AFA.

“The students are being saturated with God’s Word,” Amy said. “It is really incredible.”

Besides the support that AFA has offered, Cyprian has a pig farm to help supplement the school cost. The classrooms were nice with desks and chairs and currently include about 50 students with three teachers.

Cyprian has a vision of expanding the schools to primary and secondary, all with AFA’s help and support, in the future. The biggest need will be land and the AFA team explored some opportunities with that as well.

Even the food has been good, Amy reported. A meal with beans, rice and chicken filled the bellies of the AFA team on the visit to Cyprian’s home.

On Thursday the team’s driver, Moses, took the group to his brother’s ministry, “Silent Whispers,” in the ghetto of Jinja. The Christian outreach is for young mothers.

“The ghetto of Jinja was insanely heart-wrenching,” said Amy, who gave a donation through AFA. “I cried like a baby. Silent Whispers is doing a great outreach with the little they have. It was really an honor to give to them.”

On Friday, the team visited Global Theological Seminary and Victoria Baptist Church. Amy was able to share her testimony.

They also visited an orphanage that Franklin Graham supports and they are willing to train Cyprian’s teachers for free.

AFA purchased worm medicine for all the students at the El-Shaddai school and enough to give them a dose for each of three terms. The cost was only 14 cents per child.

“We actually purchased 500 does for Cyprian to give to community kids also,” Amy said.

Continue to pray for Chris and Amy, Bobby Bowen, Rob VanHoose and Rob Barber as they minister and share with the Ugandans. They will have the opportunity to hear Cyprian preach at LifePoint Church on Sunday and are looking forward to that with great anticipation.

God is working with the team on the vision of how AFA can further the work.

They will be involved in a four-day crusade next week and are expecting hundreds to come and know the Lord in this mostly Muslim community. The team has more than 800 Bibles on hand, including more than 400 in the native language. Many in the area speak English as well.

“God gave us these Bibles for a reason,” Amy said. “We look for a great work to be done in this crusade.”

Pastors from throughout Uganda will be traveling to participate in the crusade that essentially consists of street preaching and praise music.