NJERU, Uganda – Nearly one year ago, Amy Compston wrote a note in her Bible.

That’s not unusual. She’s written hundreds of notes in the pages of her very used Bible. But that one conveyed a special message: Amy said God told her that Amy For Africa would purchase land near the Nile River. The date was June 24, 2017.

After looking at various plots of land near the current El-Shaddai school last December, including some not in view of the famous river, the property that AFA settled on was, indeed, complete with a view of the Nile River. 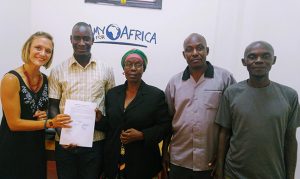 Lots of prayer followed but in about 12 weeks, through generous donations of individuals, churches and even corporations, the money was in hand. The cup, indeed, spilled over as it was even more than was needed for property so the extra was earmarked for building.

Amy Compston and the AFA Ugandan board members made it official on Monday, signing the papers and paying off the rest of the loan to make the sale complete. It came on June 26, 2018 – 366 days after God directed AFA to land near the Nile River. Amy found that precious note in her Bible on Sunday, exactly a year from when she wrote it down. 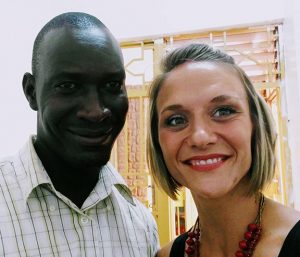 It was a monumental day for the organization that celebrated its fifth year in operation in May.

“We’ve been praying for land for several years,” Amy said. “It has been on our board’s hearts for a long time. We know God is faithful because we’ve watched it for five years. We serve an awesome God!”

The land will be used for a new school to accommodate children throughout the Njeru community. The El-Shaddai school, currently located on the same grounds as LifePoint Church, was bursting at the seams.

The government had given El-Shaddai a reprieve to find something bigger or be shut down and God provided again. The only Christian school in the area will not only stay open but it will soon have a brand-new building. Construction will begin as soon as possible, Amy said.

El-Shaddai Primary and Nursery School currently has around 70 students but that number is expected to expand quickly. More than 200 children are attending an AFA Vacation Bible School this week. Public and private schools in Uganda are not free to children so many cannot afford to attend. But the El-Shaddai school comes with no tuition cost because of the donations that come through Amy For Africa. It takes only $45 to feed and educate a child for a year. Most of the students come from Muslim families in the area but they are learning truths from the Bible through Christian and college-trained educators. 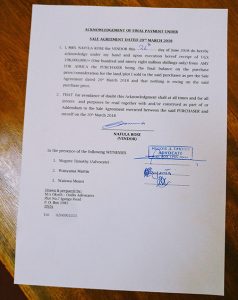 As an added bonus: The transfer took place on the 36th birthday of Cyprian Illukol, the pastor of LifePoint Church who also leads El-Shaddai school.

God paved the way for the school to purchase property earlier in the spring when Amy For Africa become a non-governmental organization, also known as an NGO, in Uganda. It is essentially like non-profit status in the United States. However, it was needed to be able to purchase property. AFA Uganda has a separate board that includes Chris and Amy Compston and four Ugandans. They have an office in downtown Jinja and work under the auspices of the board in the U.S.

Individuals who matched donations and others who made large donations, a fundraiser that included Amy’s 7-year-old son Jarek running his second half marathon, and a sizable corporate donation that included an extra gift from the CEO were all part of how the $55,000 was raised with two months to spare.

The Judy Tiller Foundation had already given $10,000 toward construction of the school.

“It took everybody and we’re thankful to each and every one who gave anything,” Amy said. “God laid it on hearts and put it all together. We celebrate His goodness with this land today and pray that it will be used to reach thousands for Christ.”