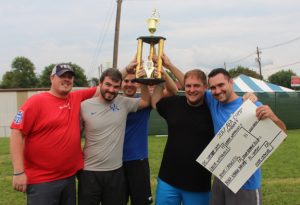 ASHLAND, Ky. – It was a perfect finish for the Kona Kannon Ballers on Friday night.

Most Valuable Player Jason Rosen pitched a perfect game – striking out 11 of 12 hitters and fielding the only ball Greek Wiffology managed to hit – to lead the Kannon Ballers to a 2-0 victory in the Amy For Africa competitive wiffleball tournament.

Rosen was dominant from start to finish and Kyle Gilmore hit a two-run home run in the bottom of the third inning to provide all the runs he needed.

Rosen struck out the side in the fourth inning, which was the last, in the wiffleball tournament.

“I closed my eyes and swung,” Brammell admitted.

Brammell was the star pitcher in the semifinal, leading the Kannon Ballers to a 4-2 victory over the Night Crawlers. Rosen also took away a home run with a great defensive play in that game.

The 36-team AFA wiffleball tournament, where players pitch to their own team, starts Saturday morning at 8. A Home Run Derby takes place at 3 p.m. and the championship game is scheduled to start at 5:15 p.m.

The tournament is played in the side lot at Unity Baptist Church at 2320 29th Street.