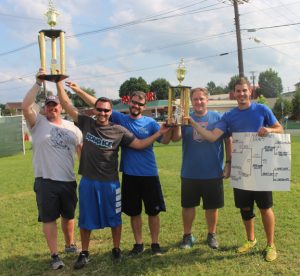 Kona defeated the Ashland Police Department, 10-5, on Saturday afternoon in the championship.

Kona won the coveted title in 2014 and avenged a bitter loss in last year’s championship game.

The APD made an improbable run to the championship game and made some history as well by being the first team to lose and advance.

The Ashland Fire Department defeated APD, 5-1, in an opening-round game but surrendered their spot to the policeman after it was over.

That’s when the APD caught fire, knocking off some great competition along the way.

But the Kannon Ballers, who also won Friday’s AFA competitive tournament, made it a clean sweep by playing powerball.

But it wasn’t without some controversy as David Greene, the coach of Busch’s Greene Beans, called out the Kona players for “juicing” with the Kona Ice.

“Those guys can have all the Pina Colada juice they want,” Greene said. “How fair is that? I’m just saying. Those guys are juicing with Kona Ice and we can’t do anything about it.”

Fultz said there have been other inquiries but it’s all a lot of baloney.

“Yeah, I have already heard from the city attorney. We didn’t even use the bats we own. We were all legit and a lot lucky,” he said.

Juicing or not, the Kannon Ballers knew how to rock it. Fultz blasted a game-ending home run in the semifinals against Arnie’s Army, winning 10-2.

But it wasn’t all easy. After crushing Amy For Africa 8-0 in the first game, the Ironton All-Stars nearly pulled off the upset of the tournament before falling to the Kannon Ballers, 6-3.

“Those little guys took it to us and nearly beat us,” Fultz said.

After the game, Fultz gave the Ironton All-Stars a free Kona Ice for their efforts.

“But did they get the Pina Colada?” Greene wondered.

The APD stunned the Slingin’ Dingers in the semifinals 11-4 as Richard Bohanan hit a walkoff home run to secure the win. Police Chief Todd Kelley harkened back on his days of wiffleball on East Jepson for motivation.

“I’ve played a lot of wiffleball in my day,” he said. “This was like relieving my glory days.”

Wes Horn was the captain for APD.

The APD had an early lead in the championship, but a big second inning made the difference for Kona which strategically used the “mission” ball to belt five home runs.

Zack Greene won the coveted Home Run Derby championship. He powered five out of the Fenway field in the opening round.

The 36-team tournament was the biggest in the five-year history and $3,000 was raised for the Amy For Africa foundation.