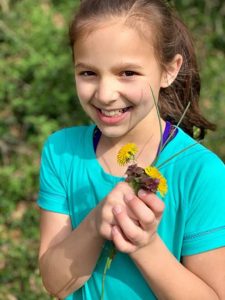 Kinslee Wesolowski, 10, will be running a half marathon on May 18 to raise money to feed children in Uganda.

ASHLAND, Ky. – Sometimes the smallest among them make the biggest impact.

Say hello to Kinslee Wesolowski, a 63-pound girl with a great big heart for children she’s never even met.

The 10-year-old niece of Amy Compston of Amy For Africa will be running a half marathon on May 18 and she wants to use her gift to provide food for children in Uganda.

“Little children have the biggest hearts,” Compston said. “I’m so proud of Kinslee that she would take on this challenge to conquer 13.1 miles for these children. Her mother understands the extreme need because she saw it for herself (on a mission trip). She held these precious children and fed them.”

Danielle Wesolowski and her husband, Andy, have been generous supporters to AFA since it started. Danielle, who is also an accomplished long-distance runner, immediately said “Yes!” to her daughter’s request to run for the children in Uganda.

Kinslee, who is a fourth-grader, has been running on the Clark County cross country team for three years. Her longest distance so far has been eight miles, her mother said.

She runs five times a week in between softball practices and her mother is training her.

“Her training is going well,” Danielle said. “She is like a natural runner so it does seem like it comes a little easier for her, except the long runs.”

The half marathon intimidates her, Danielle said.

“When someone mentions running 13.1 miles, she starts to feel defeated, like she is too small to accomplish this for God. I just tell her to run and have fun and remember why she is running. God placed it on her heart to run for these kids in Uganda. She prays about going to Uganda every day.”

Kinslee heard stories about the children involved in the Amy For Africa ministry through her mother who served on an AFA mission team in December 2017. She and her husband have plans on serving again soon.

Hearing those stories and seeing the photos from her mother’s trip to Uganda stirred her daughter’s heart and called her to action.

“Just seeing the struggle these people and children endure every day breaks my heart but, at the same time, they are happy,” Danielle said. “They have joy and hope in their eyes and were receptive to hearing about Jesus.”

Danielle said she wants her family to not take for granted what God has given them.

AFA partners with Silent Whispers ministry every Saturday morning where 350 children are fed breakfast of a cup of porridge and a cookie biscuit. Kinslee’s goal is to raise $2,100 to provide breakfasts for nearly the rest of 2019. She has raised $500 with 17 days until race day.

Anyone interested in donating can go to the donation area on amyforafrica.com and put Kinslee in the message portion after typing in a donation amount. Everything given – 100 percent – goes to the project.

Kinslee is doing her part to feed hungry children. Can you help her?