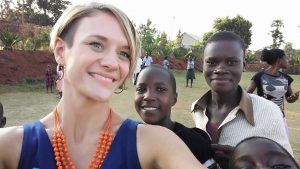 These are busy days for the five members of the Amy For Africa mission team this week with a weeklong conference and crusade in the works.

It is a busy time but a most joyous one too.

The absolute glow on Amy Compston’s face tells a story that exudes the love of Jesus. Amy and the rest of the team are doing that kind of work in this area of Uganda.

A crowd of 100 came to the teaching conference in the Muslim-strong area. It was a far bigger number than Pastor Cyprian Illukol, the organizer of the convention and crusade, expected and then about 200 came out to the street crusade.

Because of the heavy Muslim influence, Cyprian wasn’t sure there would be many come out at all.

God had different plans and now the expectations are that both the conference and crusade will grow with each passing day. Several pastors made the 15-hour drive in to help with the crusade for the rest of the week.

The AFA team was able to teach the Ugandans during the conference and preach during the crusade with eight Africans coming to know the Lord.

Certainly, the moment wasn’t lost on Amy, who champions the AFA team with her passion and prayer.

“Teaching today was such an honor,” she said. “I had a moment where I couldn’t believe God was allowing me to do this.”

The AFA team was able to serve Cyprian and his team food today and that was even more than a rare occurrence. It had never happened previously.

Cyprian, the pastor of Life Point Church and the administrator at the nursery and primary school El Shaddai that AFA is partnering with, has thanked the team over and over again, Amy said.

It has been a time of great joy for all the AFA members on the trip – Bobby Bowen, Rob Barber, Rob VanHoose and Amy’s husband Chris.

Continue to keep the team in prayer until they come home on the weekend.