ASHLAND, Ky. – Two donations from a pair of teenage young ladies could be the impetus for a movement with Amy For Africa.

On Sunday, AFA leader Amy Compston posted on social media that “AFA received two of the sweetest donations to date” from two teenage girls. The first one, a 14-year-old, walked up to her in church and handed over an envelope stuffed with $200.

“I emptied out my piggy bank and want to give this to AFA,” the teen told Amy.

Later that night, Amy received a text message from a 15-year-old who asked her how much did it cost to sponsor a child? 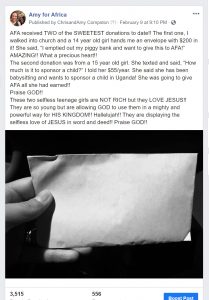 “I told her $55 a year and she said she had been babysitting and wants to sponsor a child in Uganda. She was going to give AFA all she had earned.”

These selfless acts have spurred others to action. The combined total from the teenage girls was $255. Within 24 hours of hearing about the donations, two have matched that $255 total and another has donated $25.55 in honor of these sweet girls. So at this early stage, the #255 campaign sits at $535.55, not counting their original $255. These teenagers are examples of what’s right with today’s teenagers.

We’re asking supporters to AFA are asked to do the same – donate big or small in $255 increments. All the money raised will be used to build the AFA Christian Academy. Put #255 in the message line if you donate through the AFA website.

The generosity of these teenage girls can be multiplied tenfold or even hundred-fold.

“They are displaying the selfless love of JESUS in word and deed!” Amy said. “Praise GOD!”