ASHLAND, Ky. – Amy For Africa introduced the game of basketball to Ugandan children this summer.

The bouncing ball will be part of AFA this fall in northeastern Kentucky. 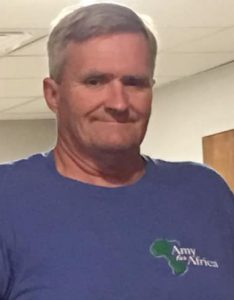 Long, who at 58 will be the oldest player in the league, said six teams will begin a seven-week regular season on Thursday night. The top four teams make the playoffs in the eighth week of the fall league.

Bridges Church in Russell is partnering with AFA for the adult basketball league (ages 18 and up). Bridges also purchased the jerseys for every participant, Long said. Forty-two players make up the six teams that will play four-on-four games.

Long struck up a friendship with Bridges sports director Joey Lewis in the winter basketball league and asked him about using the church gym for the first fall league.

“I floated the idea to him and he kind of ran with it,” Long said. “He has the connections.”

Bridges is allowing the league to play in the gym at no charge. Players were charged fees to pay for referees Patrick Ewing and Dameon Charles. Teams will play every Thursday night at either 6, 7 or 8. Games are 20-minute halves with a running clock until the last two minutes.

A short devotion is given before each game and if players don’t make it in time for the talk, they must sit out the first half.

Long, who is the unofficial commissioner of the league, said AFA will receive between $1,000 to $1,500 in donations.

“This is the first year and we hope that will grow in following years,” Long said. “It won’t be a money-maker all of the sudden, but 42 people every week will hear some kind of Christian devotion.”

The basketball is competitive, Long said, with several former high school players from the area on the seven-man teams.

Long said his coach, Derrick Jordan, got “the steal of the draft” in Chris Compston, the husband of AFA co-founder Amy Compston.

“Nobody knew how good Chris Compston was, not even his own son-in-law (who also has a team in the league),” Long said. “I’d take Chris over anybody in the league and we got him in the third round.”

Amy Compston will give the first devotion on Thursday night’s game.

“We love Chris Long,” she said. “He has supported us from the beginning with his running and now he’s doing it with basketball. He’s one of AFA’s most loyal friends.”

Long and Amy’s youngest son, 8-year-old Jarek, have developed a “friendly rivalry”  in road racing for a couple of years.

“I don’t think Chris wants any part of Jarek anymore,” Amy said with a wink.

“I can’t wait for that little shrimp to be big enough to play basketball,” Long said through clenched teeth.