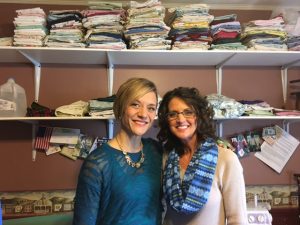 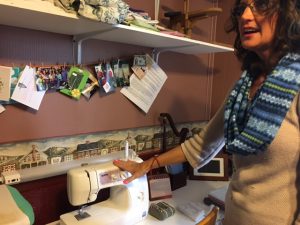 Emma talking about one of her sewing machines. 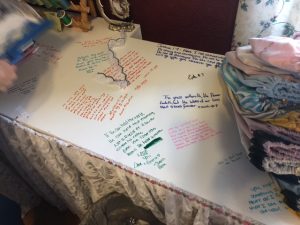 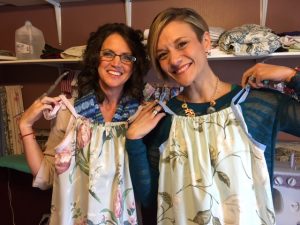 COAL GROVE, Ohio ­— In the back room of a house in a small Ohio community is a dress factory that’s providing worldwide smiles.

Dave and Emma Pratt have their own “assembly line” that has produced 1,800 pillowcase dresses in the past three years.

About 600 of those dresses have been donated to the Amy For Africa mission that has taken them to young girls in Uganda who often show up in rags.

“It’s such a blessing to have partners like Dave and Emma who have this gift that they want to share,” said Amy Compston, the co-founder of AFA. “We couldn’t do what we do without willing partners. Dave and Emma are so faithful.”

The Pratts learned of AFA through a neighbor who told them the mission group was coming to their church that weekend.

They found out on Facebook that the AFA whiffleball tournament was being played that Saturday and Emma asked a friend to go with her to meet Amy.

The meeting was God-appointed for Emma, who had been frustrated after making more than 700 pillowcase dresses but having nobody to take them.

The dresses the Pratts and others have made for AFA have been delivered on the past two trips to Uganda by the organization.

“If they could only see the smiles on the faces,” Compston said. “We have the easy part and the best part by giving the dresses away to these beautiful children. Some of them come to us with rags on their back and some have nothing at all. Being able to clothe these children is such a blessing.”

Dave and Emma are a team themselves. He cuts out the patterns and does the ironing and Emma does the sewing. The couple love working together on the pillowcase projects in the backroom of their small home. They have tables lined up around the room with three working sewing machines. Material is stacked on shelves. They also have a prayer string that has photos hanging on it, including several from Amy For Africa.

“We are so thankful for Amy For Africa taking our dresses where they are needed,” Emma said.

Emma said the pillowcase dress idea came from her neighbor, Andi, who also makes the dresses. She also gave them dress patterns.

“I was asking God for something to do,” Emma said. “That was my answer.”

She found her calling along with her husband, who enjoys putting together the finished product as much as his wife.

Another part of the pillowcase dream team is Sue Wills, a church member of the Pratts, who provides the pillowcases and sheets necessary to make the dresses. She attends yard sales and estate sales looking for material.

Pratt said they have never run out because of Wills’ efforts.

“It’s amazing how God puts projects and ideas on people’s minds and then meshes it all together,” Compston said. “We have partners who pray for us, some who give regularly, some who makes dresses, bring us shoes and other clothes, and some who are encouragers. We are so thankful for each and every one of them.”

The Pratts also have sent dresses to Haiti and to impoverished Appalachian areas. They are always looking for new areas of ministry. “But the bulk of what we do goes to Amy For Africa,” she said. “We love that ministry.”