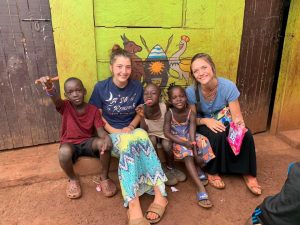 NJERU, Uganda – It is with overwhelming sadness that Amy For Africa has severed ties with LifePoint Ministries and Pastor Cyprian Ilukol over philosophical and spiritual differences.

However, the El-Shaddai Primary and Nursery School remains in the hearts of AFA so the organization will pay salaries of teachers and staff and tuition for the nearly 100 students until January 2021.

The decision weighed heavily on hearts and minds of the AFA leadership but after much prayer and discussion, there was no other option than to dissolve the three-year partnership.

“It came down to differing visions between Cyprian and AFA,” said AFA co-founder Amy Compston. “The visions were getting farther and farther apart and it was affecting our overall mission, which we couldn’t let happen. The spirit of communication wasn’t there either. We tried to work through it but God was telling us to split. It grieved our hearts.”

A letter was crafted and personally given to Cyprian on Sunday. The content of the letter also said AFA would pay for teacher and staff salaries until January 2021 and he would remain the school’s director until that time. El-Shaddai is on the property of LifePoint Ministries.

Cyprian agreed to the arrangement of AFA continuing to pay teachers and staff so that the school would continue operating.

“We want to make sure the children can continue to receive the education we believe they all deserve,” Compston said.

It has been a difficult time as these decisions were made, she said.

“Sometimes God has to do some pruning to make you stronger,” Compston said. “We believe that’s what is happening here. We cannot compromise God’s purpose for Amy For Africa.”

AFA is fully committed to constructing a new academy that will eventually hold 1,000 students. The property has been purchased and the first phase of construction is set to begin in October. Contracts were signed Saturday for $560,000 – about half of the total cost of the school. The first phase completion will be classrooms for students, allowing the school to operate in January 2021.

“It would be our plan to bring the teachers and students from El-Shaddai over to the new school in 2021,” Compston said. “We love our teachers and the sacrifice that they’ve been making to give the students a high-quality education. They are some of the greatest women I’ve ever known and I love each of them so much and respect them for what they’ve already done.”

AFA, founded in 2013, has been in the Njeru area for the past three years. The organization previously helped sponsor and start six Christian schools in the Moyo area of Uganda.

“We are committed to sharing the love of Jesus Christ with this part of Uganda,” Compston said. “This doesn’t change our vision for what God will do in the least. We are committed to building this new school and watching it grow as God blesses us.”

The Ugandan board will be seeking a director for the new school.