ASHLAND, Ky.  – The seventh annual Amy For Africa Wiffleball Tournament is on deck.

Forty teams will be taking their swings and 50 games played on the two fields at Unity Baptist Church on the corner of 29th Street and Blackburn Avenue on Saturday. 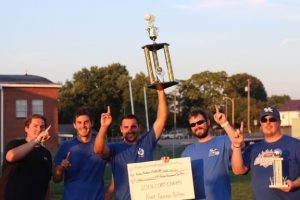 A bounce house, a free-for-all water balloon battle with 1,500 balloons, food (Andy’s Barbecue, hot dogs, water and soft drinks) and Kona Ice will all be part of the fun.

All the money raised at the tournament will go toward the building campaign for the new Amy For Africa Academy (#buildthatschool). The first phase of the project is $561,000 and a contract has been signed.

Some games to watch:

-Summit Natzy Boys play Bailey’s Bums at 9:40. This features the first game for Lauren Spears, the Ashland Kittens slugger who has joined Aaron Snyder’s Nazty Boys. Snyder is being touted as the general manager of the year.

-Ashland Police Department vs. Ashland Fire Department and Boyd County Jailers vs. Boyd County Sheriff’s Office. Both games take place at 1:20 p.m. The winners and losers of those games face off immediately in the next game.

-Radio Rebels, who two  years ago endured one-hitting themselves, are back and better than ever (Tom Roten is on vacation and cannot play).

-Brooks Bombers bring in three players who were on college baseball rosters for a third appearance in the tournament. It could be their year. (This team is named after my grandson!). They play an unknown team of Boyd County Lady Lions at 9:40 a.m. Could be interesting.