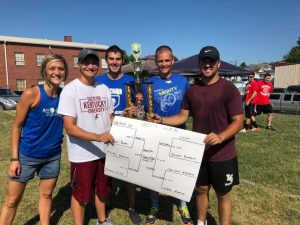 Jason Rosen’s one-handed leaping snare snatched away a sure home run from Derrick Wyatt on the last play of the game and Kenner’s Killers won the championship 13-9 over Brooks Bombers.

The incredible catch in right center saw Rosen sprint from center and reach his left arm up as high as possible to turn the line smash into the last out of the game. It would have pulled the Bombers within two runs with the top of the lineup coming up and the 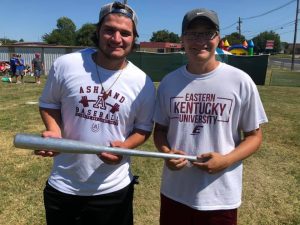 It was the first AFA championship for Kenner Bailey, who picked up several team members in, uh, free agency. Rosen and Chris Compston had played on teams who were eliminated earlier and Matt Vincent, the tournament director, had his own team but also played for Bailey.

So, in all fairness, it was a bit of a loaded team. But, hey, it’s Wiffleball.

“I’d played in the championship before but never won it,” said Bailey, who was worried after his dad Larry’s team, Bailey’s Bums, had advanced to the quarterfinal round. “No way they should have made it that far. They shouldn’t have won the first game.”

It was a day of upsets. Tournament favorites Kona Krushers and Greek Wiffology were among many of the expected best teams that were eliminated early in the 40-team tournament.

The Bombers made it into the championship for the first time with Brandon Rosen (Jason’s brother), Kyle Rakes and brothers Derrick and Braden Wyatt.

Kenner’s Killers knocked off WashedUp, 10-3, in the semifinals while the Brooks Bombers clobbered One-Hit Wonders, 11-3. The Wonders were the former Shepherd’s Fold, which holds an AFA tournament title.

Some other highlights included 7-year-old Brevin Snyder belting two home runs, including a walkoff for the Summit Natzy Boys And Girl who were a surprising 1-3, even after getting a second-chance entry into the field. Lauren Spears clubbed two home runs, tying Brittnany Hoback for most by a female in the tournament.

There were well over 250 home runs hit out of the two fields, many landing on 29th Street or Blackburn Avenue.

Fifty games were played from 8 a.m. to 5 p.m. with Wiffleballs flying out of the two make-shift fields that are at modeled after Fenway Park – complete with a Green Monster – and Camden Yard.

The Camden Yard field, where the championship played, was the toughest field for competitors all day because of how the wind was blowing in. On the Monster Field, the wind was delightedly blowing out.

Thirty-six Home Run Derby competitors lined up and Zach Greene came away with his second Silver Bat for winning. He also was the home run champion two years ago. Greene crushed 21 home runs while advancing through the competition.

The tournament brought in nearly $2,500 to AFA and all proceeds will go toward the AFA Academy being built in Uganda. The organization signed a $561,000 contract for construction of the first phase of the school. It will eventually hold 1,000 students and house 200 of them.

“We are so thankful for everybody who put together a team or cheered for somebody today,” said AFA co-founder and namesake Amy Compston, who works as a missionary. “God’s blessings just poured out on us again today. Thank you isn’t enough for the many, many people who had a hand in helping us with this tournament.”