ASHLAND, Ky. – Runners from seven states – and two countries – were among the 103 who participated in the June 6-7 Amy For Africa “Hope For A Future” Virtual 5K.

Not only were runners competing throughout the United States but two runners in Uganda took on the virtual 5K, making it a full-fledged international race.

Runners could choose any course in any city, state or country to run the virtual 5K, put together because of the worldwide pandemic. Participants were from Kentucky, Tennessee, Ohio, West Virginia, Florida, North Carolina and Texas. Friends and supporters of AFA turned out in big numbers on a sun-kissed day in Kentucky. 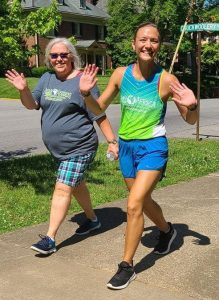 “We praise God for allowing runners from some many different places to run for Amy For Africa, including two on the other side of the world in Uganda,” said AFA co-founder Amy Compston. “We love how God stirs the hearts of so many people to help us in this journey here and halfway around the world.”

The fundraising run was organized by Alan Osuch Race Planning and volunteer Chris Long. The organization had a good day in helping the #BuildThatSchool campaign with $2,000 raised through the race and other donations.

“We have watched God perform miracle after miracle with our new school,” Compston said. “I cry every day just thinking about how God has poured his blessings on us. This race was another blessing. We appreciate (race organizers) Alan and Pam, and Chris Long is amazing. He has done so much for AFA, running countless 5Ks for us, donating all the time and even running a basketball league for us. He never wants any credit for any of it. We love him even if he harasses our youngest son, Jarek, because he hasn’t been able to beat him in a 5K.”

Compston, an experienced marathon runner, had a special running partner for this 5K. Her mother, Kathy Whitely, competed in her first 5K and finished it behind her daughter’s prodding. AFA sponsors celebrated with Kathy by giving $310 for her finishing the 3.1 mile walk/run.

“She has watched so many 5Ks, cheered for so many of us, babysit when that was needed, and always is there supporting me. She is such a selfless person. She had done everything but run in a 5K,” Compston. “So now she’s done that. I was proud of her and, you know me, I pushed her a little.”

The Ugandans who ran were Ronald Ssekamate, the project manager over the construction of the new AFA Christian Academy, and AFA supporter and translator Muwonge Augustine Morgan.