#BuildThatSchool: God shows His glory to Amy For Africa

ASHLAND, Ky. – Amy Compston was excited Thursday morning about the opportunity to share on the National Day of Prayer.

Speaking publicly for the first time in two months, the co-founder of Amy For Africa was, in a word, pumped. She spoke with her typical passion at the Boyd County Republican Women’s Club’s event. It was powerful. She hadn’t lost her touch when it came to praising God. It seems to come naturally for her.

Her day was about to get better.

When she returned home, Amy reached into the mailbox and pulled out a letter that included a $40,000 check to Amy For Africa. It was shouting time. Her hands were trembling and her voice cracking as she called her husband, Chris, with the news. He burst into tears. She followed that call with others in the AFA and her own family. It was a moment none of us are likely to ever forget.

The theme for the National Day of Prayer was “Pray God’s Glory Across the Earth” Well, He showed us His Glory, and in a big way, and in the sweetest, most perfect timing. 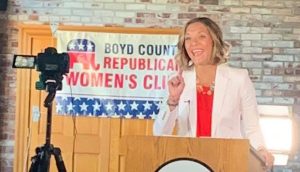 The donation covered the remaining $38,850 that was needed to pay for April’s construction bill for the AFA Christian Academy in Uganda. The workers will return to the job site and put a roof on the school in the coming weeks. The first phase of this project was going to stay on schedule for the January 2021 opening.

“The school is being built by faith and in prayer. Each month we pray and we depend on God to provide for each month’s construction bill,” she said in a message on Facebook. “As you guys know, we are in a global pandemic and churches have been shut down. I have not had any opportunities to share the work. But our God is unstoppable and He doesn’t need me, or anything, or anyone. He’s God!”

The construction bill received in early April was for $72,260. Even during the pandemic, when speaking engagements were being cancelled daily, more than $35,000 had come in to the AFA coffers through faithful donors who stand behind this ministry. We are so thankful for each one of them. 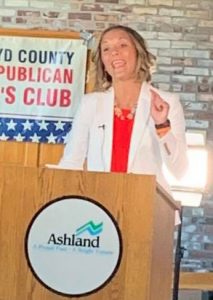 Early Thursday morning, the project manager of the school building messaged Amy and asked if whatever money we had collected could be sent so the construction team can pay some of the suppliers.

Amy gave him this answer: “I said, ‘Brother we can do that, but let’s wait until this weekend. Let’s see what God does and I can send it by Tuesday.’”

Ever faithful Amy. She had no idea that she would be sending all $72,260 on Tuesday. She was able to call Ronald, the project manager, after she returned home and found the donation, with that exciting announcement.

Amy’s faith never wavered. Not Thursday, not ever, not for one second.

Thursday morning, before she knew there was a $40,000 check in transit to her address, she texted me about the project manager’s request to send the money with this prophetic message.

“May GOD just pay it off in full this weekend.”

She has never put her faith in man, only God. And each step of the way, her faith has grown stronger and stronger. 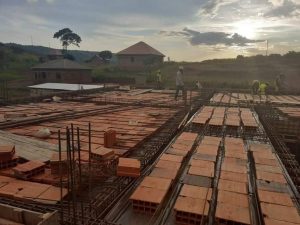 “It’s going to come, I know it,” she said on more than one occasion. “It’s God’s school. He is going to build it.”

Her faith strengthened AFA’s mighty prayer warriors, a group of bow-the-knee people you want on your side. We have seen God move mountains throughout the journey, and it’s because of prayer because that was how God instructed it to be completed. Now with what looked like an immovable object that nobody could even see in front of us, with the world going through one of the worst times in history, how was it going to happen?

But everybody kept believing, most of all Amy, and kept praying. If it took a miracle, she reasoned, then good, we’ll be witness to it. She said it will only make the story of the AFA Christian Academy that much better to tell.

“Our God is doing this,” she said in her video message. “He’s a miracle worker, he is powerful. No pandemic, no anything, can stop Him. He is worthy of praise! Keep praying, ask him to reveal his glory, and oh he is faithful!”