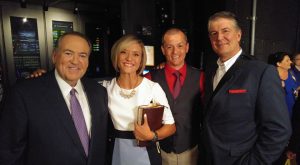 Mike Huckabee is with Amy, husband Chris and Rob Barber in the Nashville studios prior to filming the Huckabee show for the Trinity Broadcasting Network.

NASHVILLE, Tenn. – Amy Compston and the Amy For Africa mission will be getting national television exposure on the world’s largest Christian television network June 2.

Compston was a guest on “Huckabee” that will air at 8 p.m. EST / 7 p.m. Central on the Trinity Broadcasting Network (TBN). Former Republican presidential candidate Mike Huckabee hosts the weekly hour. Amy was named as one of “Huck’s Heroes” in a short segment on the show. It was filmed Friday night.

“(Former Arkansas) Governor Huckabee was so incredibly gracious and kind,” Compston said. “He took the time to sign autographs for everyone in the studio audience. He has a huge heart and it shined through tonight. He and his staff made us feel so comfortable and welcome.”

Compston, husband Chris and AFA videographer and friend Rob Barber received the star treatment from the show, including being driven to the studio by Huckabee’s staff.

“I stand amazed once again at God’s amazing grace,” Amy said. “We made some unbelievable connections. It was such a blessing. Our God is so good!”

The program can be viewed on Dish Network channel 260 and on DirecTV channel 372. It is also available on most cable networks. It can also be seen on tbn.org and on Huckabee’s Facebook page.

Launched in 1973 with one small station broadcasting to the Los Angeles area, TBN today is a growing family of over 30 global networks reaching every inhabited continent with a broad range of inspirational, entertaining, and life-changing programming twenty-four hours a day.

In the U.S., TBN’s family of networks is available to 98 percent of television households, and globally TBN reaches an estimated two billion potential viewers each day.

Amy will be headed back to Uganda in mid-June with her husband, son Jarek, niece and another AFA supporter. Amy, her son and niece will be there for five weeks. The mission team will be having a Vacation Bible School for the students and community and Amy and Chris will be able to sign the official paperwork on the purchase of 2.9 acres of land which will be the home for the new El-Shaddai school.