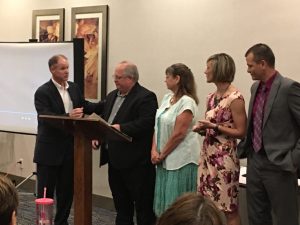 LOUISVILLE, Ky. (KT) – The last week in February, the Amy For Africa organization took a leap of faith.

They put down $20,000 on a $75,000 purchase of three acres of land on the Nile River, close to where the first Amy For Africa school is located near the village of Njeru in Uganda, to build a new school and church. The rest of the payment was due in August and the AFA bank account was mostly empty with monthly bills coming due.

The school’s current location is on a crowded half-acre of property and there’s more students than room. The Ugandan government was shutting down many schools, private and public, because of poor conditions. The El-Shaddai Primary and Nursery School, the AFA Christian school that teaches Jesus in this mostly Muslim community, was given an extension but had to have a new school under roof before the next school year started in January 2019.

So the time was not only right, but urgent. The AFA board, all Kentucky Baptists, saw no other answer but to take a leap of faith and put down the available funds for the down payment of the property that is in the same village and watch God work.

“That $20,000 was given last April (2017) and we’d been praying about land since January 2017,” said AFA co-founder Amy Compston, a member of First Baptist Church Russell. “We held onto it, praying that we could use it.”

In an eight-week period from March 11 to May 9, the faith that Amy For Africa had that God would provide was rewarded, including a May Day that will not be forgotten when a Louisville-based corporation, Saber Management, Burnaugh Baptist Church in Catlettsburg, Ky., and an anonymous individual provided a windfall of $42,000 during a 24-hour period. AFA went into the day already having raised all but $17,000 toward the property debt.

Saber Management, which owns and operates 19 cemeteries and four funeral homes in Kentucky, Illinois and Texas, has been a three-year supporter of AFA. The cooperation has provided $10,000 each of the past three years and CEO David Sullivan and his wife, Sara, added an additional $5,000 donation this year. Spurred by Sullivan’s generous actions, several other executives pledged contributions and another provided $2,000 to finish paying off the land.

“It is amazing,” Compston said, “but it’s only a speck of God’s glory that he has shown us. It doesn’t even compare to His glory. We’re just experiencing a little speck of his glory and it’s mind-blowing.”

Compston said the partnership that AFA has developed with Saber Management has been more than a blessing. “They are changing the lives of children 8,000 miles away and doing it with such generosity and kindness,” she said. “We have gotten to know Dave, Damon (Melcho), Charlie (Rouse) and Dewey (Akers) on a personal level. They treat us like family. We look forward to getting together with them and telling about the great things God is doing through their contributions. It makes me want to cry. God is showing his favor on us by partnering with this incredible company that has a heart for the children in Uganda.”

Sullivan’s wife, Sara, was on a mission trip with her daughter and unable to attend the annual meeting. “I just love Sara,” Compston said. “She may not have been there in person but her heart was with us. We are proud to be associated with such great people and this great company.”

Children who attend the AFA Christian school pay nothing for school fees or books and they are provided daily meals, too. “That’s because of sponsors in America,” Compston said, reminding that $45 will sponsor a child for a year. Public and private schools in Uganda have tuition and book fees for students.

Compston, the co-founder of the non-profit Christian organization that is celebrating its fifth anniversary this month, never doubted that the money would come. But nobody expected it to happen how it did.

“That’s God, all God,” she said. “We talked about how it was never an if about getting the money but how God was going to do it.”

He did it through generous individuals, corporation sponsorship, churches and a 7-year-old boy.

Amy’s son, Jarek, ran his second half marathon with his mother, an avid runner, as his sidekick and trainer. They competed in the nation’s largest half-marathon, the Indy Mini on May 5, and finished in 2 hours and 6 minutes and it bettered his personal record by 11 minutes. He also defeated 72 percent of the nearly 20,000 runners who finished the half marathon in the run that took them through downtown Indianapolis and even over the famed Brickyard race track.

AFA set up the fundraiser of celebrating the organization’s five-year celebration by donating to Jarek and Amy running the half marathon about a month before the race. As a 6-year-old in November, he ran the Marshall University half-marathon in a time that was second in the nation for 6-year-olds and raised more than $11,000 to transport 3,000 pounds of Christmas gifts to Uganda last December.

This time the money was earmarked for the land purchase and $17,500 came in during the one-month fundraiser period.

“God uses anyone that’s willing to be used,” Compston said. “Even a 7-year-old boy who trained and suffered for children he has never met.”

That will change this summer when the youngest son of Chris and Amy Compston will be going with them to Uganda for a five-week visit along with their niece and another AFA supporter. Amy was praying that they would be able to break ground on the new property while they were there despite knowing the deadline would still be a month away.

“Nothing is too big for our God,” she said. “We have watched Him work through us for the past five years, so nothing surprises us anymore. He keeps showing His power in everything that is happening through Amy For Africa. I never dreamed that this former drug addict could be a missionary, but I’m so thankful that He chose me for this work. I’ve never been happier in my life and have the best job in the world.”

Compston will be speaking at the Kentucky Baptist Convention’s evangelistic meeting in Pikeville, Ky., on Nov. 11.