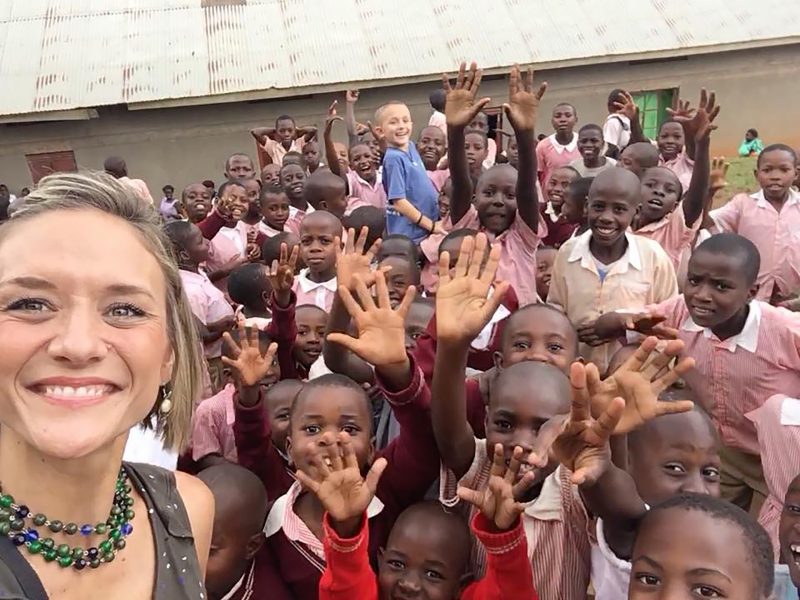 By CHARLES ROMANS / The Daily Independent

Poverty is a condition in which far too many people around the globe suffer, and there is one consistent characteristic of poverty that crosses all borders.

The locally-based charity, Amy For Africa, has worked for years to change this with a great deal of work done in rural Uganda. This week, they’ve announced the first phase of a fundraising project to build a new state of-the-art school with chapel in the area of Njeru, Uganda. The non-profit is seeking to raise $550,000 in its first phase of fundraising for the $1.1 million project.

“It will be one of the nicest buildings in all of Uganda,” said Amy for Africa’s president, Mark Maynard, who is the former editor of The Daily Independent. “It does a lot for the school and the students…but it also does a lot for their economy. We are using all Uganda workers.”

The anchor of Amy for Africa is Amy Compston, a former drug addict who has turned around her life through God. The Ashland resident was at a point in her life where she had no hope; a dark, lonely place fueled by addiction. But Compston said her hope was reborn through an awakening of faith. She said that Jesus Christ redeemed her, and now she is on a mission to spread the hope that she has been given.

Compston said that it isn’t her mission, but rather God’s mission –and that mission led her (with Maynard) to begin Amy for Africa, a Christian-based charity that fundraises and does missionary work in Uganda. Compston runs marathons and speaks publicly about her own struggles with hopelessness and addiction, and has dedicated her life to making the lives of others better at home and abroad. She said her focus is always upon the message, but her current project involves the building of the Christian school in an area where education is all but nonexistent.

“Two and half years ago, in August of 2016, we were invited to an all Muslim area in Njeru, Uganda,” Compston said. “They asked us to partner with them and take over a little school there.”

“Since that time, for the 2019 year, we will have close to 100 students with five classrooms. But we have children that we have to turn away because we don’t have enough space where we are now.”

Compston said that over the summer, however, they secured three acres of land that Compston views as a “gift from God.” With this new space they would be able to expand the school and do more for that community. Compston said that led them to turn to their faith to seek guidance on what the new school should be; and she said that as he had in so many other ways, the vision provided what was needed.

The new school, when completed, will accommodate 1,000 students and house around 200 of that number in dormitories. The project will require 400 days to complete the first phase of construction (classrooms and the chapel) with a full construction crew working full time, and will cost approximately $550,000. The full project will cost $1.1 million. But Compston said that she is confident the non-profit will find the resources needed to complete the project.

“God has been so faithful,” Compston said. “Just this year he has provided us with the land for the school, the architect to design the school, and a five-acre farm – we have to have a way of feeding a 1,000 students three times a day. It’s really exciting what God is doing over there through two nobodies from Ashland, Kentucky,” Compston said.

Maynard, who helped found the organization, also shared his excitement for the faith-based projects.

“God has put people in our path to help us,” Maynard said. “People might look at us and say ‘You can’t do that’ – and they are absolutely right,” Maynard said. “We aren’t capable of coming up with a million dollars to build this building. But God is. We have seen miraculous things happen in the last six years that have changed our lives, and a whole lot of Ugandan lives. It has helped us be more faithful; and so, yes we can, with God.”

Both Compston and Maynard look forward to seeing the impact on the future of the area. The existing school teaches a curriculum that is comparable to American schools and will allow those graduating to continue that education into college level, ideally earning degrees that will transform their part of the world.

“Wherever God is, there are blessings,” Compston said. “And it is so obvious that He is working there because we are seeing souls saved, people are working, and they have hope.”

Compston recently returned from a trip to Uganda to see the second kindergarten class graduate from the school. While she was there the group passed out more than 900 Christmas presents, each of which included a toy, clothes, hygiene products, and school supplies, which were taken to several villages. “We fed them, shared the Gospel, and gave them all a Christmas present.”

Amy for Africa has posted videos of their numerous trips on their Facebook page and their website, amyforafrica.com, so that people at home can see what they are doing in Uganda. There is also a link for people who wish to make a tax-deductible donation. The organization continues to follow its mission both at home and abroad. Maynard said anyone interested in supporting the project can call him at 606-571-1031 go to AmyforAfrica.com.