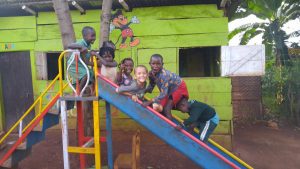 NJERU, Uganda – Only three days into what will be a five-week stay for three of the five Amy For Africa mission team members and the countless blessings are flowing.

And so are the countless tears.

That’s normal. They are both usually in abundance on AFA mission trips. This one has been extra special for Amy Compston and her husband Chris, with the youngest missionary AFA has ever taken along for the ride.

Their son, Jarek, a tender 7-year-old with a heart as big as all outdoors, is fitting in fabulously with the other children. “His friends,” as he called them before ever meeting them, really are becoming his friends.

They are playing, poking and, in time, praying together.

Jarek has already made an impact here because of his half-marathon runs that have brought in much-needed funding to AFA the past two years. Everybody wants to see “the boy who runs.” His heart is becoming like his mother and father’s when it comes to loving the Ugandan people. You can see it on his face in the photographs they have posted on Facebook. He is making lifetime – and eternal – connections.

The biggest problem Amy and Chris may have is getting him home to Kentucky.

“Oh he LOVES it here!” said his mother via Facebook messenger. “Reagan too!”

Reagan is Amy’s 13-year-old niece, Reagan Evans, who is finding a lot to like about Africa too. She has many of the young children clinging to her as well. It’s almost celebrity status for Jarek and Reagan who find themselves, uh, standing out in the crowd.

Amy, Chris, Jarek, Reagan and Emma Pratt, the only non-family member on this trip, twice visited the “Ghetto” area of Jinja where AFA partners with Silent Whispers, an organization that does what it can to see to the needs of “some of the least of these,” in Uganda. This is an area where hope left long ago. But the message that AFA brings along – that Jesus saves – gives them a reason to put hope back in their vocabulary.

Emma, who grew up in an Amish community before leaving at the age of 19, has been teaching some basic sewing skills to the women on the only treadle sewing machine in the village where homes are no bigger than closets in the United States. God immediately showed approval by working on the hearts of those watching on Facebook to purchase seven more machines.

“Only by God’s grace,” Amy said. “We had a great time of fellowship, learning and loving people!”

Women and children gathered around Amy for devotions each day in the Ghetto and then Emma taught them sewing skills, including an apron on the second day. “The ladies learn so quickly,” Amy said. Meanwhile, Reagan and Jarek were like magnets with the children.

“We had the privilege of passing out 300 of Emma’s pillow case dresses!” Amy said. “They were a hit! We were also blessed to be able to give out several pieces of jewelry, t-shirts and toys that people have donated! It’s awesome being able to not only speak about God’s love but express it in a tangible way!”

The AFA team also visited the campus at LifePoint Church where the El-Shaddai school is located. They attended church on Wednesday and renewed acquaintances and ate with friends there.

The journey has just begun with so much more to come, including a return trip to the Ghetto on Saturday to feed starving children and a worship service on Sunday that makes you get up and dance. It may last three hours, maybe four or even five. God lets them know when it’s time to leave.

Next week comes the Vacation Bible School where hundreds of children may well show up. There will also be the Monday ceremony of the land transfer to AFA of the $75,000, 3-acre piece of property that will be the home of the new E-Shaddai School and LifePoint Church in the coming months ahead.

The time will fly by quickly, especially the two weeks that Emma and Chris will be there, but some mighty big work will be getting done.

Amy For Africa is thankful for everyone who supports this ministry with prayers, gifts or financially. You truly are making a difference.