HIGH-FIVE! Be part of Amy For Africa’s 5-year celebration 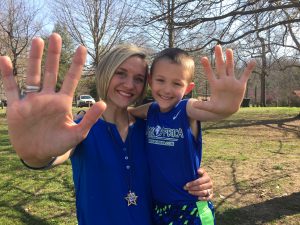 Amy and Jarek urging sponsors to give FIVE!!!

ASHLAND, Ky. – Amy For Africa is closing in on our five-year anniversary.

Co-founded by Amy Compston and Mark Maynard in May 2013, the organization has been part of successful, life-changing missions in Uganda by helping start six schools in the Moyo district and sponsoring the first AFA school in the village of Njeru in the Buikewe district.

Compston came to the realization that she wanted to “run for God” following the 2013 Boston Marathon on April 15, 2013 when she finished about 30 minutes ahead of two explosions near the finish line. Amy and 22 of her family members came away from the terrorist attack unharmed yet changed forever.

God’s word has been spread through Amy telling her grace story to literally thousands over the past five years.

She’s still “running for God” both as a fulltime missionary with Amy For Africa and with her feet. She also has a mini-me running partner in her son Jarek, who was 2 years old when AFA started and those bombs went off in Boston. Jarek is now running long distances with his mother and father, Chris, who also still runs and provides incredible support to Amy and the organization. Jarek completed the Marshall University half marathon in the second-fastest time ever by a 6-year-old last November and raised nearly $12,000 for AFA in the process.

Amy and Jarek are at it again, preparing to run the nation’s biggest half-marathon, the Indy Mini, on May 5 in Indianapolis with 35,000 other runners.

By the way, five seems to be a nice number for AFA:

-Amy and Jarek will be in Uganda for FIVE weeks this summer.

-LifePoint Church, which will also occupy the land, is now FIVE years old.

-Jarek’s goal for the Indy Mini is 2 hours and FIVE minutes.

You can donate at amyforafrica.com or mail a check to Amy For Africa, 816 23rd Street, Ashland, Ky. 41101. Donations are tax-deductible.